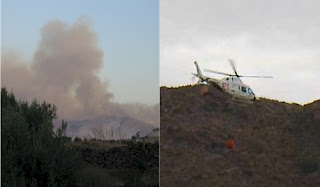 The view on the left taken from my house, and the other of a helicopter carrying water to the fire.
Posted by Freda Lightfoot at 9:20 PM No comments: 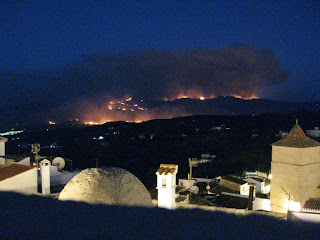 This picture was taken by my brother-in-law Mike Lightfoot last week showing the fires in the Cabreras. Now they are raging again.

Temperatures here in Almeria are in the 40s and the wind like a blast from a hot oven. It was lightening that first started the fire last week. They started again last evening, fanned to light by the strong winds. It has travelled right around the Cortijo Grande over the Cabreras, and round Mojacar. The guardia evacuated all residents in the pueblo some time during the night, and residents spent the rest of the night sitting on the playa. La Parata, above the playa, is still burning and several houses are said to have gone, though I'm not sure from where. There are bomberos and military vehicles, earth moving equipment operated by the army to form fire breaks, plus a couple of dozen sea planes and helicopters, all working flat out. They land on the sea, scoop water up with amazing skill, then take off without losing speed despite the weight of water they’ve just taken on, before heading back into the smoke. Fortunately the pine forest is untouched but the bush, or campo, mainly sage, thyme and rosemary, is till burning. Olive and almond trees are being lost, which will take generations to regrow. Wild life destroyed: foxes, goats, donkeys, the wild Andalucian tortoise among others. The lower hills and mountains beyond are black and still smoking. We know people affected, one couple lost their car to the fire while their house was thankfully saved. All roads into Mojacar and the Cortijo Grande were closed this morning, and the smell of burning is strong in the air. Awful! I can't say we've slept much as we were keeping a close watch on the fire and the wind direction. Fortunately it seems to have died down now and the firefighters seem to have it under control now. No doubt they will continue to damp it down for days to come.
I spent much of the night thinking, should I start packing, and what should I take? I confess I'd start with my children's photos. Then the external hard drive which again has loads of photos on it, plus all my novels, of course. My livelihood. I reckon everything else could be replaced, save for all that trivia of my life which has no intrinsic value beyond pure sentiment: favourite books and trinket box, Guide badges, my grandmother's baby clogs and patchwork quilt, naff ornaments from family holidays, a coiled pot my daughter made me, my mother's recipe book, mementoes from my wedding. Then there's the more mundane stuff: money and credit cards, clothes, passport, toothbrush. If you don't have time to collect together all of your essentials and favourite stuff, which do you choose to take with you?

Posted by Freda Lightfoot at 12:25 AM No comments: 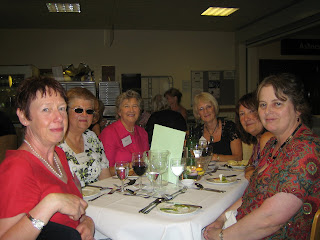 On the photo from the left you can see Liz Gill, Catherine King, Joan Emery, me, Leah Fleming and Trisha Ashley.

Posted by Freda Lightfoot at 4:04 PM No comments:

This is my first blog, so here goes. I'm the author of 30 published novels, and I hope to chat about books, writing, my work in progress, and life in Spain, which is where I live for most of the year. My latest saga is House of Angels, which comes out in hardback in September 2009, paperback next Spring.

I'm a member of the Romantic Novelists Association, and I recently attended the annual conference, held this year in Penrith. The weekend began with a panel of writers in Penrith Library, which was great fun and inspired some excellent questions from the audience. Katie Fforde, our Chair, welcomed us and we settled down to a busy and entertaining weekend, the volume of chatter rising as time went on. We had some excellent speakers:Veronica Henry telling us the amusing tale of how she got thrown out of university and ended up running a night club before moving on to being a production secretary first in radio and then in TV. She ended up writing scripts, but is now a successful novelist. If she writes as well as she talks, her books will be worth reading. Anita Burgh spoke on presentation and writing a synopsis, Myra Holmes on how to write a proposal for a non-fiction book, which she presented with her customary skill, and a delightful talk by Jodi Thomas on how to break into the American romance market. There were many more, too numerous to mention. I gave a talk on how to promote yourself. I love doing library events and meeting readers.