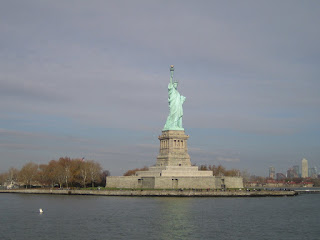 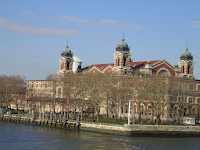 While in New York we visited Ellis Island. It was fascinating to see where the immigrants were taken, subjected to intensive questioning and endured medical checks. Eyelids were lifted with boot hooks and if there was any sign of disease, even a cut from shaving was considered suspect, they were isolated and could well find themselves sent back to their home country. The saddest part of this story was that they weren’t returned to their own village where they knew people, but to the port from which they embarked upon their journey to America, which could be a long, long way from home. A father or grandmother might be sent back, or girls as young as 12 could be abandoned in the port of Liverpool unless a parent was available to return with her. But if there were other children to care for in the new world, or parents had already died on the voyage out, this might not be possible. 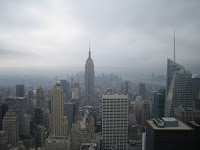 We went up the Top of the Rock, which was great, if a little scary. From here we could see the whole of the New York skyline set out before us, including the Empire State building, the Chysler Building and others. The lift, or elevator as we should call it, shot up 63 floors. Oh, my! Even our hotel, the Marriott Marquis, had 48 floors, and the top one was a rotating restaurant. Amazing sights from there too. 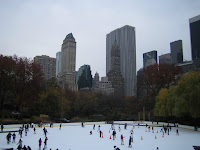 We walked up 5th Avenue, window gazing at designer stores such as Armani and Gucci where the rich do their shopping. We then walked in Central Park, feeling rather as if we were in a movie set as so many parts of it were familiar. The walkways, the pond and skating rink, for instance.


Then after lunch in a typical New York diner, we visited Macey’s to do some Christmas shopping. That second evening we saw The Jersey Boys. A feel-good musical. Great fun and great music, particularly for anyone who remembers Frankie Valli and the Four Seasons. We loved it, although I have to say that ticket prices were a great deal higher than in London.

Manhattan was smaller than I expected, particular Broadway and Times Square. The streets were narrower and congested with both traffic and people, the sky scrapers taller, and with little warm sunshine filtering through we needed our hats and scarves. But then it was November. We enjoyed New York immensely and while using common sense and watching our purse and wallet, felt perfectly safe. We would certainly go again.

Posted by Freda Lightfoot at 3:52 PM