Self publishing ebooks on Kindle

Ebooks, they say, are the coming thing, and according to a recent survey it is women who are using them most. We already know that women read more than men (no comment on that one) so it shouldn’t really be surprising, even though one might expect the take up to be greater among techie young men. The young, of course, will adopt it anyway, as a normal progression from the mobile phone, iplayers, ipods, and the rest.

These are exciting times for writers, for however you package it, people still like a good story. For readers too, as it will increase choice, instead of restraining the consumer to the bestseller lists and 3 for 2 tables. And there are lots of bargains out there, freebies too.

Finding that the rights of some of my early titles had reverted to me I decided to investigate turning them into ebooks. So began an interesting and challenging journey, a steep learning curve in fact. I began by scanning the books on to the computer as the first two were written on an old steam typewriter - a Lettera 22. The rest on an Amstrad 9512, a dedicated word processor with a daisy wheel printer which I thought was the bee’s knees back in the 80s and early 90s. It had a spell check. Amazing! Though it took 20 minutes to complete a long document, time enough for me to drink my coffee while it completed the task.

Next came the editing and revising and I discovered, much to my relief, that I’m a better writer today than I was in those early days. Coming to the stories fresh, as I’d largely forgotten the details, I was able to see where they were overwritten and tighten them, eradicate clumsy sentences and even check the copy-editor’s changes. Not always perfect! The story wasn’t changed in any way but I was able to improve the telling here and there. It proved to be a fascinating experience and I learned a great deal about myself as a writer from it.

I spent hours wrestling with Photoshop, designing and producing a new cover. Another challenge. Copyright remains with the artist so it seemed safer to make my own. I mainly used my own photographs but for some of the sagas I paid for some pictures, quite reasonably priced, from http://www.istockphoto.com/index.php

Then came the hard part - publishing them as ebooks. This involved a great deal of reading. First I studied the style guide on Smashwords, a company who supply Sony, Kobo, Barnes & Noble, mobi-pocket and others, which took some time. It was worth the effort though as it carefully explained how to produce a clean document for upload, essential if the formatting is to stay in place. I won’t bore you with the technicalities but it’s all to do with the hidden codes that Word inserts on a page, and ebook software doesn’t care for stray codes, tabs, or too many returns. I cleaned up my documents, made a copyright page, added a teaser for the next book at the end, and I was ready to go with the first five. These were historical romances originally published by Mills & Boon. Uploading them proved to be much easier than I expected, and Smashwords guide you on what to do next in order to assign a free ISBN and submit them to their premium catalogue.

Believing ISBNs to be essential I bought a batch of 10, which is how Neilson sell them, to assign to the sagas I intended to do next. http://www.isbn.nielsenbook.co.uk  I’m still not entirely sure whether I needed to do this, as there seems to be conflicting advice on the issue. So far as I am aware every book: hardback, paperback, large print, etc., has to have its own ISBN. Yet Kindle also assign an ID of their own, so the jury is still out on that one.

But if I thought it was all easy, that was before I tried Kindle. Fast forward some weeks, during which time half a dozen of my out of print titles have been duly scanned and edited, cleaned to a pristine condition and are ready to go. Or so I thought. A writer friend offered a few tips, and with courage in hand, I went for it. Oh dear, the first one, despite her warnings, was a disaster, coming out for some reason all in italic. I’d previewed it carefully before publishing, as she’d advised, but in order to change it you are asked to download html, of which my knowledge is zilch. Instead, in my ignorance, I tried to overwrite it and, yes, you’ve guessed it, got that wrong too and ended up with two copies, both in italic. Back to the reading of guidelines, hours spent on the forums, asking questions and finally, amazingly, getting the right answers. You can check how it should be done yourself at
http://www.cjs-easy-as-pie.com/p/kindle-publishing.html

Once I had downloaded the Mobipocket Creator and the Mobipocket Reader, both free from Amazon, it was indeed easy as pie. Although I cannot stress strongly enough how important it is to start off with a clean document. Easy as Pie tells you how. I was now able to thoroughly preview the entire book before even attempting to upload it, and correct my early mistakes. My stray bit of code for italic had been picked up and spoilt the entire document. I was now able to overwrite it properly and republish.

I now have 5 historical romances and 6 sagas (more will follow) published on Amazon and on Smashwords, soon to be available on most ereader devices. Or you can do as I’ve done and download the free Kindle for PCs on to your lap top or netbook. You can take a look at them here:

Posted by Freda Lightfoot at 1:00 PM No comments:

My mind hasn’t stopped buzzing since coming home from the RNA Conference this weekend. All the books I’m going to write, the publishers I shall court, the romantic novels I mean to read. The months ahead are going to be busy, busy, busy… Conference is always a lively affair, but this year we excelled ourselves.

The Romantic Novelist Association is celebrating 50 years this year, quite an achievement, and chose as their venue the Old Royal Naval College at Greenwich. The historic setting was fab, even the weather was perfect.

Friday was the industry day which I found particularly interesting, if a tad depressing in the current economic market. I wonder if publishers ever consider that reducing the size of a paperback might increase sales. With mobile phones and computers getting smaller, how is it paperbacks are now the size of bricks? Too big for my shelves, let alone my luggage or handbag. There was much talk of the effect of ebooks, and I was tempted to question the speaker on the fairness of giving such low royalties to hard working authors. Since these would last the length of copyright, until 70 years after death, it seems even more unfair in an emerging market where no one yet knows how important ebooks may become.  More worryingly it seems we have to disguise romance as something else. E.g: a thriller with a romantic thread. Excuse me? Why, exactly? What’s wrong with a good old fashioned love story? On the plus side we were told of the growth in aspirational travel tales, romantic suspense, the paranormal, and historical fiction. So perhaps there’s still hope, and writers are born optimists.

I attended many fascinating sessions over the weekend, including Dee Williams talking about how she got started with her sagas; what the US market is looking for; Samhain and ebooks; Sue Moorcroft on selling short stories; and Susanna Kearsley on research. I bought her book Sophie’s Secret, which has already got me in its grip. Writers are always generous with their help, and as at any conference you can pick up as many tips from chatting over coffee.

The climax came with our main speaker Joanna Trollope on Sunday. Her talk was not only interesting but equally thought-provoking, decrying the publishers current passion for producing cartoon jackets as if the women who read romantic fiction aren’t intelligent. In the discussion afterwards the general feeling was that perhaps editors were dumbing down the contents too, in order to play safe. Is it because of the economic situation that no one is being particularly adventurous just now? If so, then doesn’t that stifle creativity?

Writers also know how to party - it’s all that sitting alone talking to the computer - and the Gala Dinner at the Trafalga Inn was superb. This is me on the left with my friend's Karen Abbot and Sylvia Broady who both write for Robert Hale and D C. Thompson. It was a lovely warm summer’s evening with the soft lap of the Thames and swish of passing boats as we quaffed champagne on the balcony. What could be more romantic than that? And it did keep on flowing. On the Saturday evening we enjoyed a relaxing and cool BBQ in a wonderful historic court. A perfect setting to gossip about books with writer friends. 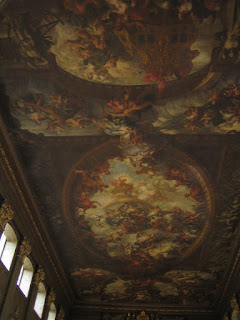 Sunday morning found my friends and I playing hookie to view the Painted Hall. Words cannot do it justice. It is quite astonishing. We took a few moments to sit in the chapel and soak in the magic as the choir sang. Beautiful.

Altogether a most successful event, and for any first timers I should think they will be aching to come again.