What do we know about sheep? 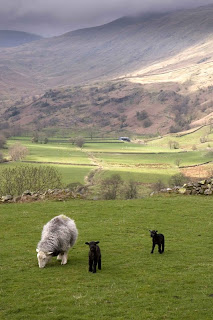 My journey as a writer continued. I now had sufficient confidence to try for the mainstream fiction market. Luckpenny Land was the first full length historical saga I ever wrote. We were still living on the small-holding, out on Shap Fell in Cumbria. And as I trekked up the fellside in the dark of a freezing night to check if our sheep were about to lamb, or to feed a pet lamb, I’d be thinking: ‘There must be a book in this. But who would want to read about a middle-aged mum, with arthritis, being so stupid as to choose to live in a place where the pantry was colder than her wonderful Zanussi fridge, where the winter snows freeze the mains water supply in the field below the house every winter, as well as the battery in her car as it stands buried in snow in the yard.

So I used those wonderful two words that writers love: What if? What if I wrote about a girl who wanted to be a sheep farmer, it was World War II and her very Victorian father thought that it wasn’t women’s work. I could then use many of the amusing incidents and anecdotes my family had experienced living this life, but write it as fiction. Snag number one: running a smallholding with a few sheep and a couple of dozen hens didn’t qualify me to write knowledgeably about running a proper sheep farm, let alone during WWII, so I would need to do considerable research.

I began by interviewing Cumbrian farmers, who are a breed apart. Stoic, strong, taciturn, and distrustful of strangers, particularly of people who have not lived in the Lake District for three generations. It’s not that they are unfriendly, only that they’re more used to the company of themselves and their animals rather than a nosy, would-be author. At this point in my career having published only short stories, articles, and 5 Mills and Boon historicals, the prospect of a full-length saga was daunting. And I’d never done an interview in my life.

When I rang the first name on my list, a farmer out in the Langdales, I spoke first to his wife to ask if he would see me. ‘Happen’, she said, which I took as a yes. To be on the safe side I took my husband with me as he was used to dealing with Lakeland farmers, and it worked like a charm. I asked the farmer a question, and he told David the answer. I was so nervous I didn’t even dare to switch on the brand new tape recorder I’d taken with me, so I scribbled notes like mad, and then even more later. I didn’t make that mistake again, but he was marvellous. He took me through his farming year, explained everything most carefully, and showed me pictures of his dogs. Not his family, his dogs. All the farmers I interviewed did that. It’s a nonsense to say farmers don’t care about their working dogs. Mr G’s dog appeared in the book, much to his delight, although the accident the fictional dog suffered was far more dramatic to that of the real dog, even if it had the same outcome. And no, I can’t say anymore without spoiling it. 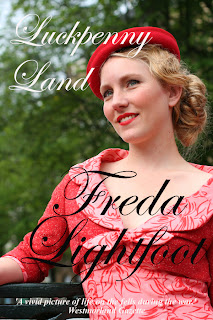 Some of the farmers I spoke to were women. Although farming was a reserved occupation during the war, many men opted to join up and leave their wives to run the family farm. I learned from them how to kill and scald a pig, how to wring a chicken’s neck and pluck it. (my hens all lived to a ripe old age) Plus all the various wangles they got up to during the war, such as dressing up a pig as a person in the car so they wouldn’t be caught out selling one. Talking to these women inspired many plot incidents and ideas, many based on real life, including the most dramatic which takes place in Luckpenny Land. And I won’t spoil it by telling you that either. Armed with the research, I started to weave a love story and plan the lives of my characters.

So how did I go about selling it? I met an agent at a weekend conference and told him all about my idea, and he asked to see it when it was finished. It took 9 months, just like a baby. Weeks later, I got The Call. There were offers from three publishers and I went with Hodder & Stoughton, now part of the Hatchette group. I loved writing this series of books, now available in ebook on Amazon, etc. Selling Luckpenny Land on a fantastic three book contract deal proved to me that persistence pays. I was on a high. What could go wrong? Well, everything, that’s what. It’s called Life.

Now available as an ebook. Buy it from Amazon.
Posted by Freda Lightfoot at 1:59 PM