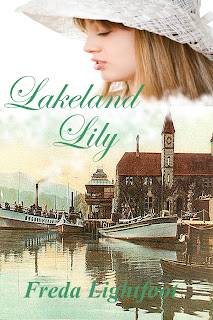 I was enjoying my new career. I finished that first series then went on to write Lakeland Lily which deals with snobbery, and the effects of World War I, followed by The Bobbin Girls, set against the wonderful back-drop of Grizedale Forest where two young people in love try to escape the disapproval of parents and make a new life for themselves. I signed a new contract for more books. Everything was going well. I’d achieved my dream. Life was good.

And then one sunny day in August, 1998, I got the kind of call no parent ever wishes to receive. I learned that my daughter had been killed. She was 27. I’m not going to linger over this part of my story as it is too painful, even now. Bad things happen to good people all the time. You just don’t expect it to happen to your own beautiful daughter.

The next few years were dark as we dealt with our grief. Writing, as you will appreciate, was the last thing on my mind. My publishers stood by me, put everything on hold and waited. My husband changed his job and we bought a small guest house. We still had to earn a living and being together every day helped enormously. My other daughter, and everyone else in the family was back at work. I had been a published writer for 10 years so felt I should do the same. The trouble was my brain was a lump of soggy pudding. Writing isn’t something you can just turn on like a tap, and my muse had gone, my hunger to write had evaporated. What was the point of it all? I asked myself. Why should I even bother to try? They were just silly little paperbacks, with no value at all. Don’t we all feel this way when real life suddenly becomes overpowering?

But my writer friends wouldn’t allow me to be so defeatist. They convinced me that Anna would expect me to keep on writing, that she was as proud of my talents as I was of hers. They reminded me how the first thing someone does when dealing with sickness or loss, is to try to lose themselves in a story. People seek escape from their troubles, and often find it in the books they read, so writing novels isn’t useless at all, they insisted. It’s a service in it’s own small way, a therapy as well as entertainment. Writing is a gift, one that in a strange way can transcend the horrors of life, the dark days of ill health and pain, and help you deal with them. It’s a step into the sub-conscious, which operates on an entirely different level. Like in our teenage years when we wrote our troubled thoughts into a secret diary, as grown-ups we can still tap into that stream-of-consciousness writing. Which surely brings hope to us all? And so I booted up the computer but found I was unable to go back to the original novel, which held painful associations. It would be another two years before I felt able to go back to Kitty Little. Instead, I dug out an old rejected piece and started to rework it. My editor encouraged me, and in a bid to keep myself from falling into that dark bottomless pit, little by little I began to write again.

You can check out my ebooks here.

Next week I'll be talking about Moving Forward, and what exactly is a saga.
Posted by Freda Lightfoot at 7:00 AM