One of the delights of living in Spain is found in exploring its hidden valleys, its mountains and fertile plains untouched by tourism or the blight of building that is effecting parts of the coast. Having been working hard on my latest book, I thought we deserved a day out and decided to explore the Los Vélez region which stretches from the northern tip of Almeria into the province of Murcia and Granada. 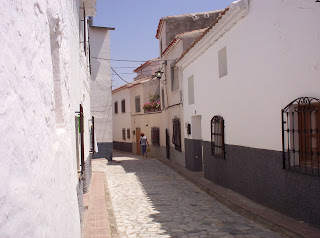 We began our tour in Chirivel, a delightful white-walled village just north of Albox.
The Roman road Via Augusta passes by Chirivel on its route from Cartagena to Cadiz, and I must say, the Romans knew how to choose a good spot. It’s charms are still evident to this day.

Valuable Roman remains were apparently found here, including the figure of Dionisos, which has become the symbol of the town, although the original has been moved to the Archaeological Museum of Almería.


The town is also famous for its pastry making, handed down from the time of the Moors, and for its honey. A small market was flourishing on the morning of our visit but I resisted buying one of the pretty song birds, hoping they would all find good homes. 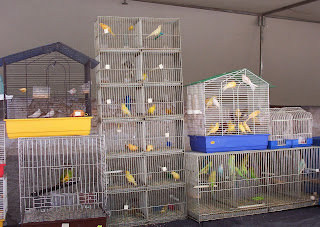 The poet Julio Alfredo Egea describes Chirivel as “with margins populated by elder trees and poplars, inhabited by goldfinches and nightingales.”

From here we moved on to the two brightest jewels of the Los Vélez region: Vélez Rubio and Vélez Blanco. Situated between the two can be found Los Letreros cave where you can see many prehistoric cave paintings, including the famous Indalo man. This has been adopted as a symbol for the entire area. “Indal eccius” means messenger of the gods. Collect the key from the tourist office and prepare to walk up many steps to satisfy your curiosity.

Lunch can be enjoyed at Meson el Molino (The Windmill), in Vélez Blanco, which has a high reputation locally, serving salmon, prawns, trout, veal, partridge and wonderful grilled meats. Not forgetting a mousse chocolat to die for. 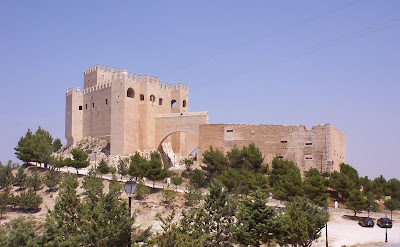 Not to be missed is the splendid Los Fajardo Castillo, the crown of Vélez Blanco, with the stunning vista of the sierra as back-drop. This was once the palace of the Marquis of Los Vélez, constructed at the beginning of the 16th century. Most of its contents have been sold to the Metropolitan Museum in New York, but it is still worth a visit for its architecture alone.


We have explored the castillo many times as Vélez Blanco is a favourite of ours, and today, after a pleasant walk around the town’s quiet streets with its water fountains and Moorish quarter, it is a good place to finish our tour for today.