The San Francisco earthquake of 1906 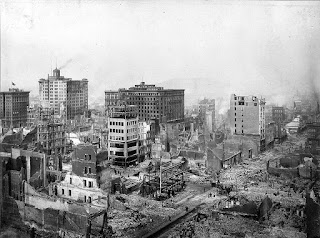 The San Francisco earthquake of 1906 struck San Francisco and surrounding towns over a distance of almost three hundred miles on the coast of California at 5:12 a.m. on Wednesday, April 18, 1906. The tremors were felt as far north as Oregon and as far south as Los Angeles. Due to the San Andreas fault, and the Hayward and San Jacinto faults.

San Francisco had always been prone to earthquakes. The city suffered countless tremors each year as the plates constantly shifted against each other and stress built up, and still does. But nothing of this magnitude had been experienced for almost half a century before 1906. And strict codes on construction had been put into place. Sadly it wasn’t enough to save them. 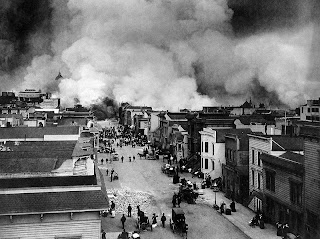 Even more devastating than the earthquake itself was the fire that followed which ruptured gas mains, destroyed approximately 25,000 buildings, and 3000 lives were lost.


In this short extract from The Promise we see Georgia attempting to escape and save the lives of her mother and sister.

All night the city burnt. By dawn the sky was blood-red, marred by a thick pall of smoke in shades of ochre, rose and lavender. There seemed little hope of ever seeing the sun again. Whole buildings were broken, tilting at impossible angles; twisted columns and pillars stood as if petrified by the flames.

And over all lay a brooding air of silence.

I’d never witnessed anything like it. With not enough water to fight it, and the dynamite blasts to create firebreaks often making matters worse as surrounding buildings couldn’t be damped down, the fire had swept the entire district below Sansome. We heard that it had jumped Kearny then devoured Chinatown, gobbling up shops and houses with their pretty balconies with as much ease as it did the paper lanterns and carved wooden dragons which gave the district its unique character.

Hand in hand, we stumbled on. As did hundreds of others, many dragging their trunks and luggage, their children and themselves, up and down San Francisco’s unforgiving hills, only to meet a wall of flame at the top and have to run for their lives in the opposite direction, often leaving everything behind.

The fire scorched down the corridors of Frisco’s long streets, destroying all in its path and leaving gutted ruin in its wake. The very heat of the flames cracked solid stone, crumbled great pillars, and bent iron and steel into a newly sculpted art form.

Finally we reached Union Square where we managed to grab a few hours sleep huddled together on the grass, along with our fellow refugees. The lucky ones slept in government tents, cooking supper on stoves they’d salvaged from their homes.

‘No point in trying for the ferry yet,’ they told us. ‘The roads are blocked all around with hundreds of refugees desperate to get a boat for Oakland.’

‘And the authorities are being hampered by crowds of sightseers pouring off the ferry,’ someone else put in. ‘Coming to gawp at the scenes of horror and cluttering up the roads and sidewalks. “Earthquake tourists”, they’re calling them. And tempers are growing ugly.’

I had no wish to have Mama caught up in an affray, and my fragile sister was suffering yet another fit of weeping that might never stop. I thought her close to a breakdown and certainly too exhausted to walk another yard. It seemed that for now we must stay put.

Ten days later we had set up camp in Golden Gate Park. The fires had died at last, leaving our city a smoking ruin, in parts little more than heaps of ash. Some streets were already being cleared of rubble and trailing wires, burst pipes mended, but few buildings were safe to enter, so here we were, sleeping in makeshift shelters or government-issued tents, our throats parched with the acrid taint of smoke, our clothes blackened. Every morning I would stand patiently in the bread queue while Prue did the same in the soup line, and Maura would go off to find a grocery store that might be open and bargain for a scrap of meat or fish. Even if she was successful the task always took her hours, but she was so restless she persisted in her daily search, quite unable to sit still.

Mama sat beneath a piece of corrugated iron atop a pile of boxes and broken chairs, demanding that Prudence, Maura and myself wait on her hand, foot and finger, in lieu of the servants she’d lost.

‘I am bored with fish soup,’ she would complain, as if we might conjure up a little caviar for her instead. ‘And do find me a proper bed, dear. I really cannot tolerate lying on this heap of old coats for much longer.’

‘There are no beds, Mama. The fire burnt them all, remember?’

‘Then something must be done.’

Poor Cecilia Briscoe. Not a woman accustomed to making do, or suffering any sort of discomfort. Her life had been near perfect until the quake, one of the city’s well-to-do with impeccable European bloodlines. More importantly, her daughter Georgia’s life too was about to change for ever.

I began to research the earthquake following a wonderful holiday we’d enjoyed in the town. I discovered that people do strange things in the face of disaster, such as marry in haste, or commit atrocities. Life goes on, babies are still born even as people are dying. And keeping track of your loved ones when the world is falling about your ears could not have been easy.

It was with these thoughts in mind that I began to dream up the plot of The Promise. I have set part of the story some fifty or so years on, in post war Lakeland where Chrissie is struggling to understand why she has no contact with her grandmother, and what is the big family secret that her mother refuses to reveal. 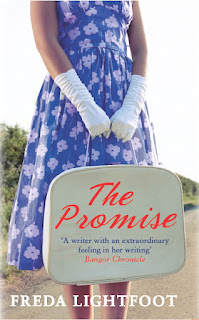 LONDON, 1948
Kemp travels to the Lake District to meet her grandmother for the first time, only to discover a shocking family secret. As the truth unfurls, the passion, emotion and astounding love that blossomed in San Francisco is revealed forty years earlier, and three generations of one family are tested to their limits.