The History of the Humble Apron 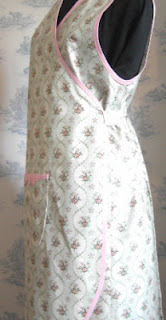 Do our daughters, I wonder, appreciate the value and history of the humble apron? My gran wore one of the overall variety, a floral wrapover that completely covered her dress, and she thought little of the frilly version my mother wore. Yet they both served the same purpose, or rather multi-purpose. The principal use of both was primarily to protect the dress they wore underneath, because they had very few of those and many aprons. It was also far easier to wash aprons than dresses, particularly at a time when fancy washing machines were in short supply.

But an apron had many other uses. It served as a potholder for removing hot pans from the oven, or to place a hot apple pie to cool on the window sill. It was perfect for drying children’s tears, rubbing clean a dirty face, or for a child to hide behind when confronted by strangers. It could be knelt on while scrubbing a step, and it was surprising how much furniture an apron could dust in a matter of seconds if unexpected company suddenly called, or how quickly it could vanish and leave Mum looking clean as a new pin. 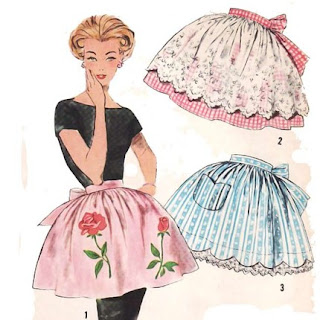 Within the mysteries of its pocket could be found a boiled sweet, a few pegs for the washing line, a handkerchief for a child’s runny nose, a hair grip, scissors, and a bit of string in case something should need tying up or ‘fettling’ as my gran would say. 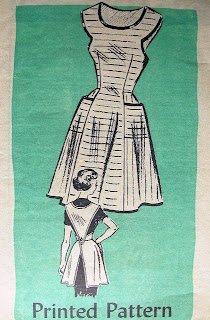 An apron often came in useful when a bag or basket wasn’t to hand. It could be used for carrying eggs from the hen coup, or vegetables picked from the garden. Logs and kindling would be brought into the kitchen in that apron, and after the peas had been shelled sitting on a stool at the kitchen door, it would carry out the hulls to the compost heap.


Mum would use it to wipe a perspiring brow as she bent over the hot fire or cooker, to wipe her hands on if called unexpectedly to the door. And when the weather turned cold she’d wrap it around her arms while she stood on the doorstep enjoying a bit of crack with a neighbour.

And on top of all this, it could also be seen as a sex symbol, as shown in this Lucille Ball picture. 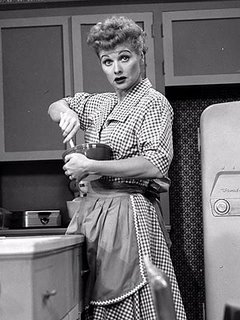 Our daughters, not to mention ‘elf and safety’, would surely have a fit at the thought of all the germs that no doubt could be found upon that apron. But I don't think I ever caught anything infectious from any of them, only a great deal of love.
Posted by Freda Lightfoot at 8:30 PM 7 comments:

The History of Washing and Ironing

I can well remember watching my grandmother using a posser, and even helping on occasion. It comprised a long stick with a heavy copper disc on the end. Those with three wooden legs were called Dollies: a feminine name perhaps emphasising the woman’s place in the kitchen, just as we often call a drying rack a clothes maiden.

Their purpose was to agitate the cloth in a wash-tub or dolly-tub as it was often called, although there were regional variations on styles and names. They were particularly suitable for cotton sheets or towels which needed to steep in boiling hot water then be pumped up and down with the stick to circulate them and presumably dislodge the dirt. The cotton fabric needed to be fairly robust to take the beating. I should think the woman concerned would develop strong arm muscles as a result. But then washerwomen were expected to be tough and strong, and were considered very much at the bottom of the ladder when it came to class. The finer clothes in a large household were the responsibility of the lady’s maid.


Mangles
Strong muscles were also a necessity to push and pull the earliest box mangle back and forth with the leather straps or wooden handles. I would surmise that two laundry maids would be required for this task, one at each side. The weight of the box filled with stones, or sand, pressed household linens that were spread flat beneath the rollers, or else were wound about them. The early 19th century saw a variety of newly invented mangles with a system of gears, wheels, and handles which were meant to lighten the laundry maid’s task by helping her to move this box. You could almost view it as an early rotary iron. 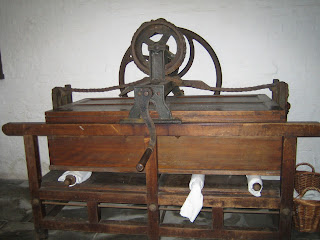 An advertisement stated it was “An important improvement in the construction of the common mangle ... by Mr. Baker, of Fore Street, London, by which the otherwise unwieldy heavy box was moved with great facility backwards and forwards, by a continuous motion of the handle in one direction; and by the addition of a fly wheel to equalize the motion, a great amount of muscular exertion is saved to the individual working the machine.” 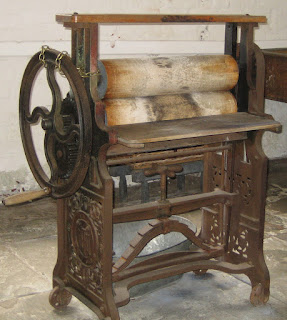 By 1823 we saw the invention of the upright mangle, which took up much less space and was therefore available for use in more humble homes. Mangles also became known as wringers, as rather than smoothing the cloth, they were now mainly expected to simply rid the clothes of water.

Irons:
Clothes then needed to be ironed. No-one can say exactly when people started to press cloth smooth, but we know that the Chinese were using pans filled with hot coals for the purpose more than a thousand years ago. Blacksmiths started making simple flat irons in the late Middle Ages, which continued to be in use for hundreds of years. I remember my grandma heating her flat irons on the hearth plate of her Lancashire range, warming one while she used the other. She had several, in fact, of various weights but all of them extremely heavy. 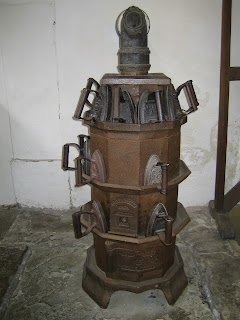 This is a picture of an ironing stove used to heat irons in the laundry of a large country house. Having tested one myself, I’d say the laundry maids would indeed need to have strong arms to even lift one, let alone swish it back and forth over a sheet. Flat irons were often called sad iron (or sadiron) an old word meaning solid. In Scotland people used gusing (or goosing) irons, the name coming from the goose-neck curve in the handle.

The charcoal or box iron had a hinged lid which you lifted so that you could fill the container with hot coals. The air holes kept the charcoal smouldering. They generally came with their own stand.

Then there were goffering, crimping and fluting irons which were meant for frilled cuffs and collars, and for the many ribbons, trimmings and intricate ruffles on a Victorian gown, which were, of course, a sign of status. No well-dressed infant could be seen out without her bonnet trimmed with double frills. This is an Italian goffering iron for that very purpose. 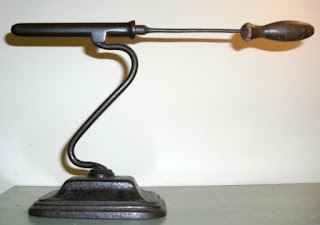 Irons had to be kept immaculately clean and polished, and regularly greased to avoid rusting. The temperature had to be constantly checked otherwise the fabric could be scorched. My Gran used to spit on hers, not being a lady of quality. Some would hold it close to their cheek, a somewhat risky procedure described in The Old Curiosity Shop.
Posted by Freda Lightfoot at 8:30 AM 5 comments:

A Visit to Madrid

Earlier in the spring we enjoyed a short break in Madrid. Since then I've been so busy writing that this is the first chance I've found to put up the pictures.Rather pathetic, I know, but I need a clone for these jobs. 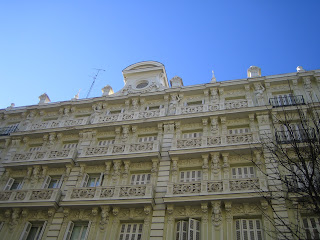 I loved the architecture with elements of Baroque and Roccoco style. 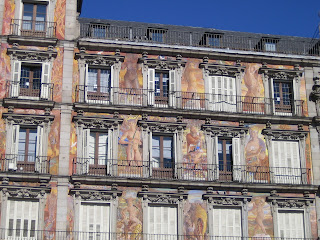 Strolling through the streets in an evening in search of a meal is always pleasant. 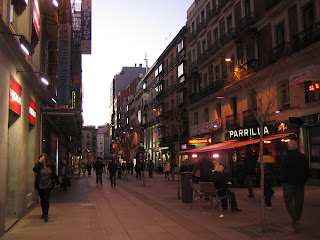 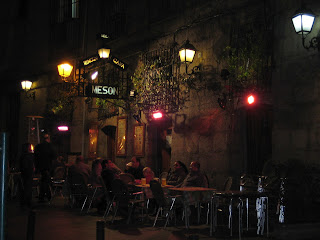 How about hanging out your washing on the roof, as this guy is doing in the Plaza Mayor.
It made me giddy just watching him. 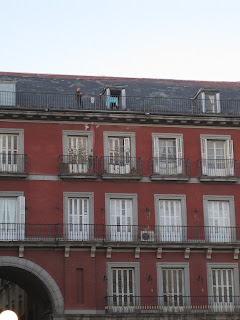 Below is the bronze statue of Philip III, created by Italian sculptors Giovanni de Bologna and his apprentice Pietro Tacca in 1616. 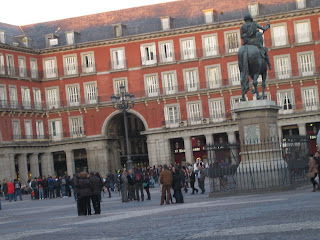 Still a centre for festivities Plaza Mayor is also a pleasant place to sit and drink coffee or a glass of wine to watch the world go by.
And here is the royal palace where King Carlos and Queen Sofia reside. You can view most of it save for those rooms currently used for formal business. 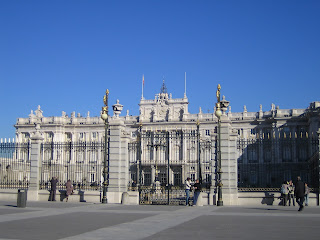 Madrid is a beautiful city well worth a visit. With wonderful parks such as Retiro Park. 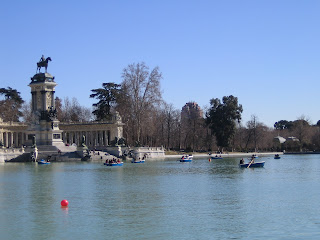 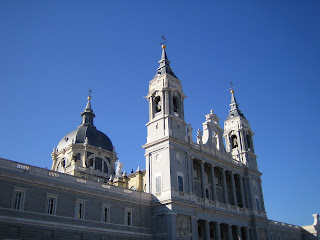 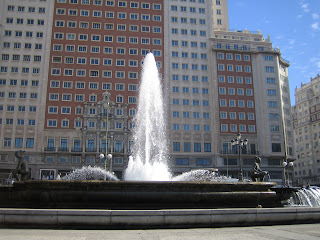 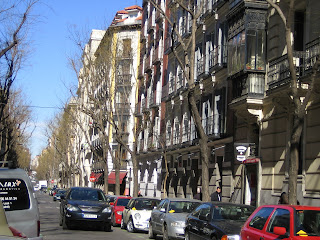 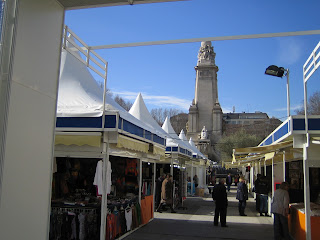 We visited the Prado Art Gallery, and the Queen Sofia gallery for more modern art including Guernica by Picasso. Absolutely amazing. We stayed at a hotel in the centre and found it very easy to walk around and explore.

Posted by Freda Lightfoot at 4:52 PM No comments: