The Next Big Thing

Frances Brody http://www.frances-brody.com/blog/, author of the Kate Shackleton murder mysteries, has invited me to take part in a blog event entitled THE NEXT BIG THING - a series of questions and answers about what’s happening next in my writing life.

What is the title of your book?

My next book, published at the end of November, is THE DUCHESS OF DRURY LANE.

What genre does your book fall under?

Where did the idea come from for the book? 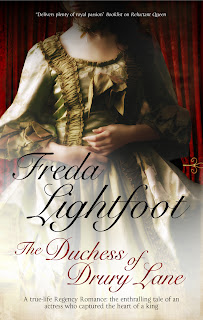 It’s a true story about a real person, Dorothea Jordan, known as Dora. I found her while researching eighteenth century theatre. Brought up in a poverty-stricken, fatherless household, she overcame her humble beginnings to become the most famous comic actress of her day, and mistress to the Duke of Clarence, later William IV. Her twenty-year relationship with the Duke was one of great happiness and domesticity, producing ten children. But ultimately, Dorothy's generous nature was her undoing and she was to be cruelly betrayed by the man she loved. 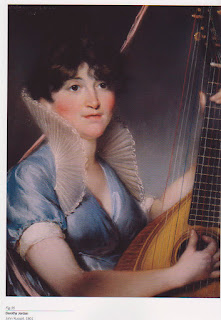 Which actors would you choose to play your characters in a movie rendition?
She would need to be a woman of spirit and independence, yet with the sweet vulnerability, and natural, wholesome beauty that Dora possessed. So it would have to be Kate Winslet.

What is the one-sentence synopsis of your book?

Will your book be self-published or represented by an agency?

THE DUCHESS OF DRURY LANE is published by Severn House in hardback on 29 November, and of course an ebook. A trade paperback comes next spring.

How long did it take you to write the first draft of your manuscript?

I don’t think in terms of first draft or second draft. I just keep going over and over it until it's done. I started researching and planning the book some six months before I began to write. The actual writing took four months.

What other books would you compare this story to within your genre?

This story was originally told by Jean Plaidy as Goddess of the Green Room, which she wrote some years ago. I wouldn’t presume to compare my version with hers, and although I read Plaidy’s book as a teenager, and loved it, I didn’t risk revisiting it when writing mine. Besides which, she wrote it in third person, and I’ve written mine in first for a more intimate insight into Dora’s character.

Who or What inspired you to write this book? I absolutely love the Georgian period.

It is a time of great excess, of gambling, drinking, and a celebrity culture that might almost match our own today. I also love the theatre, so writing about it was a joy. Dora's roles were mainly what were cross-dressing parts, where she played the role of someone pretending to be male. This was a rare opportunity for the men in the audience to glimpse a woman's legs.

What else about your book might pique the reader’s interest? 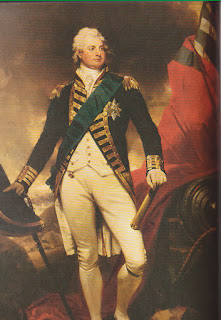 Having read several books on the period, William IV and Dora Jordan, I was filled with admiration for her. Was he a cad or just weak? I think most modern women struggling to balance motherhood with a career, as well as keeping her man happy, will totally empathise with the choices Dora had to make. At first her connection with the Duke of Clarence was considered to be perfectly acceptable by the royal family, but when duty called everything changed, and she had a fight on her hands.

My thanks to Francis Brody for asking me to take part in this blog event.


The following authors will pick up THE NEXT BIG THING baton next Tuesday, 13 November.

Nicky Wells. http://nickywellsklippert.wordpress.com/ Nicky’s debut novel is Sophie's Turn, a glamorous contemporary fairy tale featuring a rock star and the girl next door.
Posted by Freda Lightfoot at 8:30 AM