Twelve Points about Creating your Brand

1: The brand is not the book. It is a guarantee of quality. E.g: Beanz mean Heinz.

2: It is also your identity. Your Voice. It is You.

3: Don’t expect the publisher to create the brand for you. You need to grow your own and take charge of your own career.

4: Know your reader and identify your target audience. Readers don’t always know why they like your books, but you have to know. Develop a bond with the warmth of your story-telling. A brand works at a subliminal level. If a reader does say what she likes about a book - listen. Once readers are attached they will feel they know you.

5: Know your own work. Have you created the appeal necessary for your particular genre? In what way are you different? What is your particular slant or plus factor? What is the theme or common ground that links all your books? Write a catch-phrase to describe your books. Use this on the banner of your website.

6: Book jackets, newsletters and websites need to be consistent with the brand.

7. Plan a strategy. Plan your career for at least a year ahead. Be prepared to invest in your business. It is tax deductible, and it is your insurance. Your means of survival.

8:Work with your team: - editor, PR person and agent. Discuss strategy and include their ideas in your plan.

9: Start with the local press and radio. Look for an interesting hook. Remember the media is interested in you, not simply your book. If you’ve interviewed local people when researching the book, get them involved. Have a story or anecdote to tell.
Do talks for W I/women’s groups/churches/writer’s groups and conferences etc. Always make your talk entertaining, and do it without notes if you can.
Bookshop signings or courtesy calls to sign stock.
Giveaways; Contests; Newsletters; Blog tours.
Social networking - engage with readers, not just buy my book.
Update your website regularly.
Bookmarks, postcards or flyers.
Advertise in Romance, local or County magazines. These cost less and hang around a long time in dentist’s waiting rooms.
Get another author to give you a quote for the jacket.
Do reviews.
Write short stories and articles.
Constantly be on the look out for fresh ideas to promote.

10: Evaluate your brand afresh from time to time, and if it’s looking a little outdated, or sales are sluggish, or you’ve started a new series or line, then give it facelift or total overhaul.

11: Protect it. Once you have established your brand, don’t mess with it. Do not tarnish your professional image or spoil the reader’s perception. Give them the best you have every time.

12: Last but not least - enjoy what you do. Have faith in yourself, and have fun.
Posted by Freda Lightfoot at 8:30 AM No comments:

Rich in history, Seville is well worth a visit. We spent a few days there, staying at the Hotel Bécquer  in the centre, where we enjoyed a most pleasant stay. As an introduction we took a carriage ride around the city, the driver pointing out places of interest. Romera, our lovely horse, was completely unfazed by the traffic and most friendly. 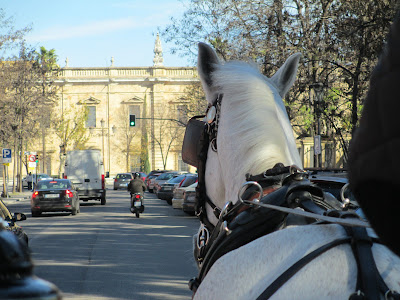 Here we are in front of the Plaza de Espania in the Parque Maria Luisa, built as part of the Expo exhibition in 1929. 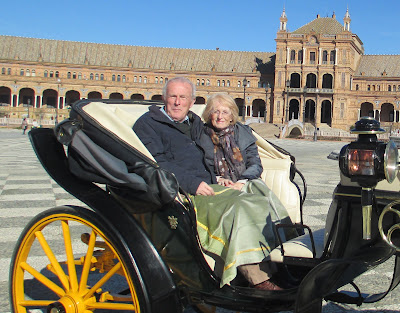 We enjoyed a late lunch in the Plaza de San Francisco, situated quite close to Plaza de Nueva and City Hall, which are at the end of the Avenida de la Constitucion and in the heart of the historic area of the city. Markets, fiestas and processions are often held in this square. I just love the balconies on these old buildings. The tapas were good too. 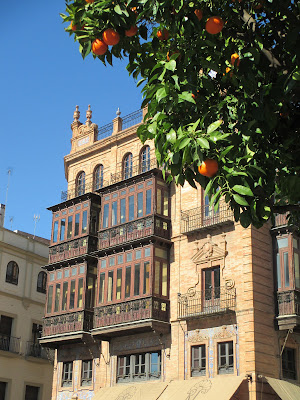 After lunch we visited the Cathedral, which was magnificent. 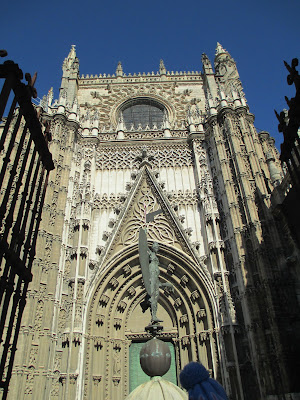 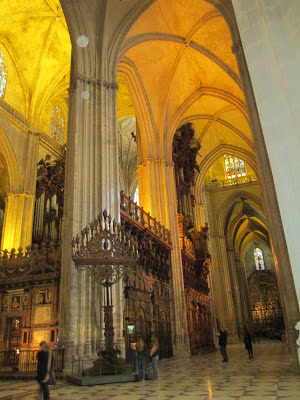 The second day we explored the city with the help of a hop-on and hop-off bus at very reasonable cost, returning to the park to visit the various museums and explore at our leisure. We particularly enjoyed the Museum of Local Customs and Culture, and also the Archaeological Museum with its Roman statues and mosaics. 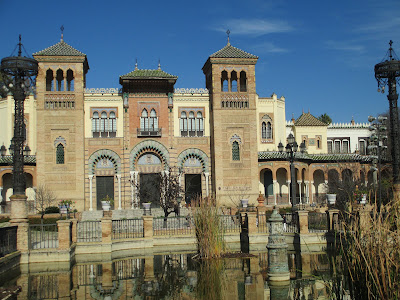 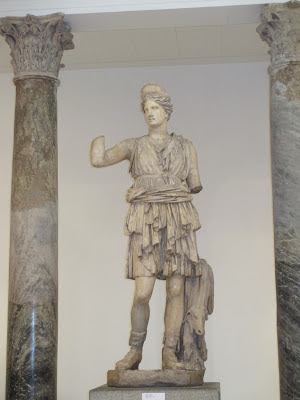 Can you see the three ladies on the stone seat? This is a statue of love sought, love found and love lost, in the Park of Maria Luisa. 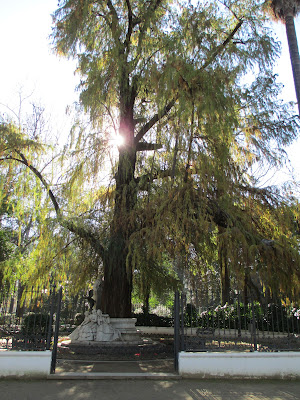 The greatest treat was on the third day when we visited the Real de Alacazar, every bit as beautiful as the Alhambra in Granada, which we’ve visited several times. Excavations show that this royal palace was built in the 10th century, adapted and added to over the years, the upper floor still the residence of the present King of Spain, King Carlos. Much of the early palace was built by Peter I in 1364, and provides a dazzling display of Moorish tiling and plasterwork which is quite awe-inspiring. 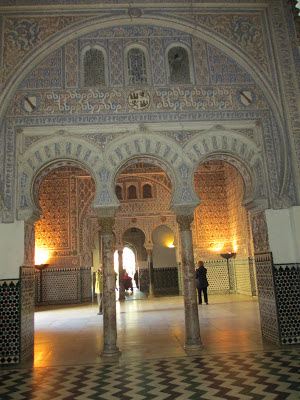 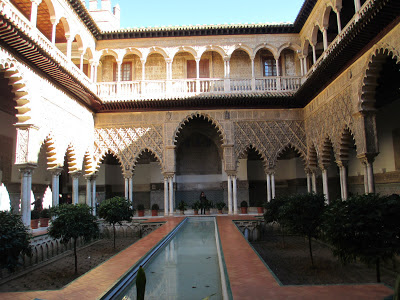 I can easily imagine some ancient King lounging by the water channels with his many mistresses, or taking a siesta in the cool, open bed chamber. 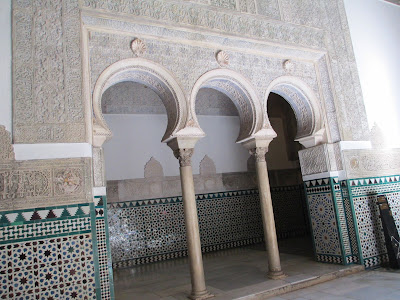 There is later evidence of Renaissance and Baroque influence, and a Gothic chapel. The gardens surrounding the palace are vast, much of it divided into outdoor ‘rooms’ of different styles, with fountains, pavilions, a maze, and even a peaceful English woodland garden. 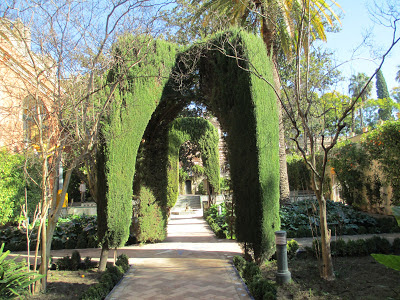 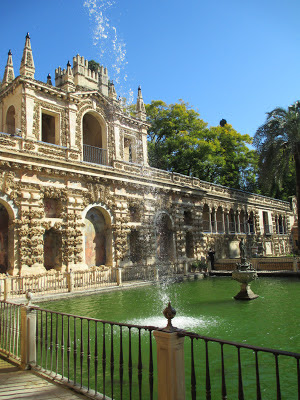 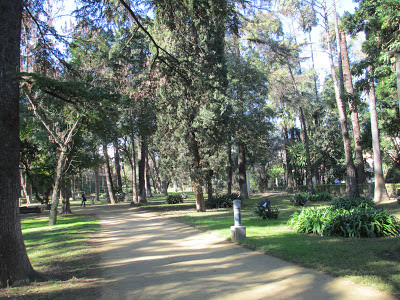 Later in the afternoon we took a boat trip along the Rio Guaudalquivir. Along this stretch of river we had a close view of the Torre del Oro, or Golden Tower. This was very likely named for its former purpose of guarding the King’s treasures, now a maritime museum. 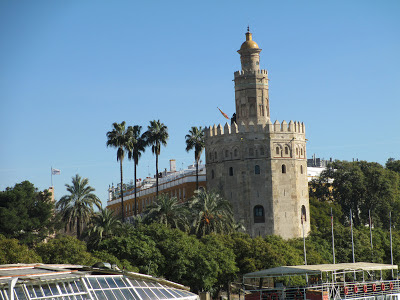 The end of the boat trip was marked by the Puente de la Barqueta, an amazing bridge built for the 1992 World Fair with a 138 metre pylon, a symbol of contemporary Seville. 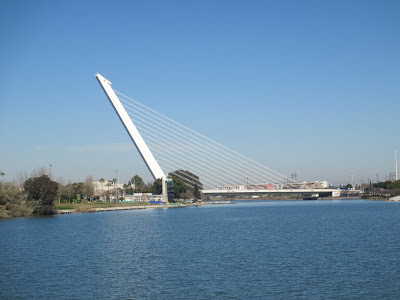 We concluded our city break by doing some shopping, admiring the fans for sale in many of the shops. Still needed in the summer in these parts, even if you are not a Flamenco dancer. 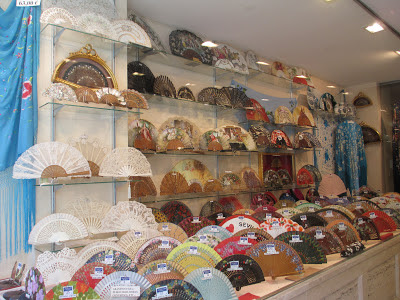 We then spent the evening watching the Flamenco in a nearby restaurant. What astonishing stamina the dancers have. It's such an exciting dance we happily found ourselves calling out Olay, and Bravo. 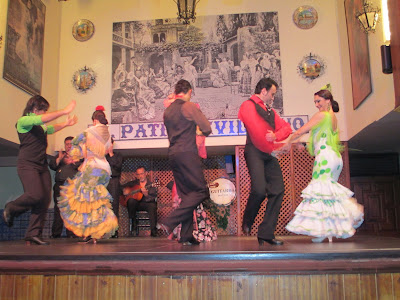 We shall certainly go again as this is but a sample of all Seville has to offer.
Posted by Freda Lightfoot at 5:17 PM No comments: