The Street of my childhood in the fifties

I have fond memories of the street on which I lived as a child, and have used them in many of my books. My favourite shop was the bakers where there was always that tempting smell of freshly baked bread, a delicious array of cakes, muffins and currant tea cakes. A custard slice for our tea on a Saturday was our weekly treat, following a hot meat and potato pie, the pastry rich and crisp, the smell of it so intoxicating I can recall it to this day. The baker also sold cold ham, roast beef and tongue, potted meats, polony, raised pork pies, and sausage rolls. Queues would form outside the shop every lunchtime in eager anticipation of a delicious snack. Tuesday was roast pork day. I would ask for a quarter, thinly sliced, and the baker’s wife would take the chunk of pork over to the slicer and quickly carve some off then wrap it in greaseproof paper. She never weighed anything, except in her hands. 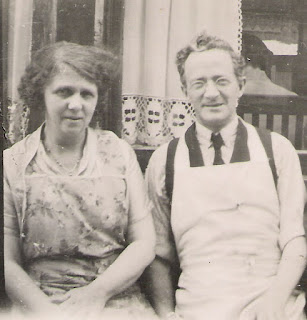 My grandparents ran a hairdresser’s shop. Grandad was one of the first to do permanent waving, building his own machine which was clamped to the lady’s head with curling grips. What would have happened had there been a fire I dread to think. Women saved up in a club for a perm, queuing up the stairs for their turn.

The ironmongers smelled of paraffin, varnish and firewood. There you could find everything from candles and scrubbing brushes to knitting wool, shoe polish, glue, torch batteries, bicycle pumps, and any size of screw and nail you might ever need. It was owned by a big, jolly man whose eyesight grew so bad over the years that he would have to hold the screw right up to his nose to judge its size. He wore a khaki apron that reached to his ankles and would take infinite care to find just the right size of screw to fit your bolt, or weigh out your pound of one inch nails till it bounced on the scales.

Jolly Mr G- and plump Mrs G- ran the little grocer’s shop. Grocers wore long white aprons, were very civil to customers if not always to children. If you happened to be in a hurry then you would just have to wait because he took his time as everything had to be cut and carefully wrapped. Butter would be cut in slabs and patted into shape with long wooden bats, then wrapped in grease proof paper. If a man was in a hurry, however, he would generally be served before a woman, even if she was there first. Her permission for this was never asked. Children were frequently overlooked completely. I was generally ignored until everyone else in the shop had been served, then Mr G- would give me a few currants as if to reward my patience and say: ‘Now, Freda, I have some nice sliced ham your mother would like.’ Even mum had to be grateful for whatever he offered, so I never refused. I was great friends with their son who spent much of his time sulking in the back room, though he was a useful friend to have as he could provide a ready supply of sticks of liquorice and Coltsfoot rock. He was also allowed to stay up late and listen to the radio, and later a twelve inch television set, which we didn’t have. I was hugely jealous.

The milk cart called every morning. You knew the milkman was on his way when you heard the rattle of wheels and the clip of the horse’s hooves over the setts. He wore a trilby hat pulled right down over his ears, and he would call out in a loud voice, ‘Muilk, muilk! He ladled this from the big metal churns into the jugs the women brought to him. I certainly remember running to the back of his trap with my jug and watching as the frothy fresh milk was poured in, no doubt unpastuerised. Coal, fish, fruit and vegetables and many other things were sold in the same way. The horses were always trimmed up with bows and ribbons on May Day. 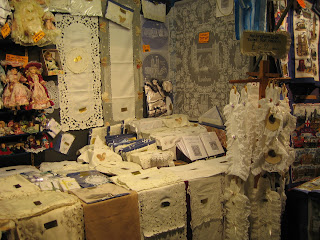 I remember the lady in the draper’s shop at the end of our row. She was a thin, very proper looking woman with tightly permed hair and a slight lisp. She sold ribbons and laces, knitting patterns and wool of every colour and hue. Her shop always smelt new and exciting, and she could measure a length of tape or blue ribbon without recourse to tape measure by stretching it from the tip of her nose, along the length of her arm to her fingers.

As for the man in the fish and chip shop, he was fat and blubbery in a soiled apron who fried the fish and chips to perfection, crisp and delectable on the outside, piping hot within. His head was bald and gleamed as if greased from the fat on his hands, and he never wore any other expression but a grin on his round face. He was called Charlie. Everyone would go to Charlie’s for their fish and chips. 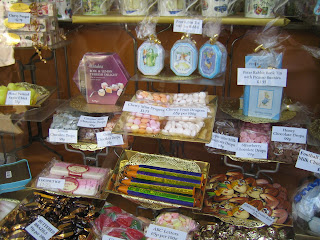 Now Mrs A- at the toy and sweet shop had the patience of Job. She’d stand for half an hour while a child agonised over how to spend their Saturday penny. And there was a great deal to choose from. Gob stoppers, dolly mixtures, aniseed balls, pear drops, Pontefract cakes, rose creams and Sarsaparilla. Her shop was filled with treasures. Foreign stamps from countries with mysterious names like Mauritious, Aden and The Gold Coast. Dinkie cars, farm animals, plastic water pistols, marbles with swirling patterns on them, tops and whips and skipping ropes with coloured handles. She also entered into the community spirit by stocking a library of romances for overworked mums. For a penny you could borrow the latest Ethel M. Dell for a week. Perhaps this was my favourite shop when I was very young. Later I peferred the record shop where you could stand in a booth and listen to the latest Elvis Presley number played to you before you bought it. But whatever my age, shopping in our street was always a joy.

In 1950s Manchester, folk are just emerging from the shadow of the war. Money is still tight, and the bustling market is a source of tempting bargains – as well as the local gossip.

All human life is here in Manchester’s Champion Street Market. Whether you want one of Patsy’s hats or a bag of Lizzie’s chocolate truffles, Molly Poulson’s pies or a rum and raisin gelato from the Bertalone’s ice cream parlour, you will get a good helping of gossip with your purchases …

The stall-holders and customers of Manchester’s Champion Street market are a lively and varied bunch. Find out more about their lives and loves in Putting on the Style, Fools Fall in Love, That’ll be the Day, Candy Kisses, Who’s Sorry Now and Lonely Teardrops. 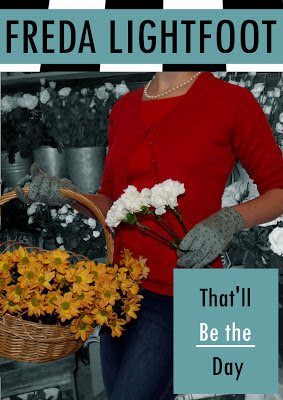