Last week I enjoyed a fabulous week at the Fowey Festival of Words and Music (or the Du Maurier Festival - as it used to be called). Can't think why they would need to change such an important international name. The Festival takes place each year in early May in Fowey, Cornwall, directed by Jonathon Aberdeen, but much of the work done by local volunteers.

It was wonderful to be back in Fowey, where we lived for 13 years, and where I ran a little gift shop on Fore Street. Good to meet up with old friends, and revisit favourite haunts, of which there are many in beautiful Fowey. My slot wasn’t until the end of the week so I could relax and enjoy the many events on offer at the Festival village, specially erected at the top of the town. 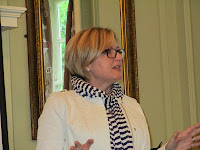 The first one of these was Liz Fenwick on Sunday afternoon. Liz gave an interesting talk about her journey to publication, and of her new title The Cornish Affair, which was most interesting. How she fits everything in to her peripatetic life style I cannot imagine.

Another fascinating talk was by Sarah Dunant, talking about her new historical novel on the Borgias: Blood and Beauty. As always, Sarah was bubbling with energy and enthusiasm, and full of fascinating and intriguing facts about this controversial family. I'm looking forward to reading it.

Judith Mackrell talked to Helen Taylor about the Flappers, a biography about six extraordinary women: Diana Cooper, Nancy Cunard, Tallulah Bankhead, Zelda Fitzgerald, Josephine Baker and Tamara de Lempicka. For anyone who loves the twenties, this book is a must have.

I also enjoyed Hilary Boyd talking about her unexpected bestseller, Thursdays in the Park. A love story that features a grandmother as the heroine, and is now to be made into a film. I think lots of women are now taking their grandchildren for walks in the park.

Lynne Gould gave a most interesting slide show on the settings for Daphne Du Maurier’s famous books, interspersed with snippets of information about her life and events that inspired incidents in the books.
The next day we listened to Jane Dunn talking about the Du Maurier sisters: Angela, Daphne and Jeanne. Angela, the eldest, was also a writer, although not as famous as her sister, and Jeanne an artist who settled into the St Ives community. All three were passionate about Cornwall.

David enjoyed Wendy Cope reading from her wonderful poems, and Simon Hoggart being witty about MPs. And we also saw two plays: The Little Hut by St Austell Players, and Memory of Water, by Troy Players. Both were of an excellent standard, and the former very funny indeed. And of course there are boat trips (the only way to view Fowey) plus many interesting walks and other events.

We loved the musical evening with Cantabile, a quartet of singers who sang with harmony and humour. I’ve never seen anything like it, they were great fun, singing Lambeth Walk backwards, and another song like a stuck 78 record. Hilarious! 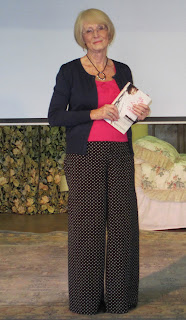 On the Saturday afternoon I gave my talk on my life as a writer set against the changes in technology. Though I'm not quite old enough to have used a quill pen, I did write my first novels on a sit-up-beg typewriter. I finished by discussing how the revolution in ebooks is changing the landscape for writers.

My talk took place at the town hall and yes, that is a bed behind me, not for me to take a rest but part of the set. It seemed totally weird to be standing on that stage again after all these years. The last time I trod those boards was as a spice girl (or rather old spice) in Sinbad the Sailor, the pantomime 'what I wrote' . Fortunately I only had to produce the basic script as the rest of the Troy Players chipped in with the jokes. Excellent teamwork and great fun.

I also might have made a passing mention to my new book:
My Lady Deceiver, which is set in Cornwall. 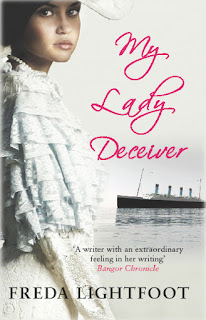 1905. Rosie Belsfield feels as if her life has ended when she is rejected from Ellis Island and put on the next boat back to England, leaving her family behind. But fate gives her a second chance when she befriends Lady Rosalind. Having boarded the ship with one identity, fate decrees that Rosie leave it with another . . . As Rosie arrives in Cornwall as ‘Rosalind’, she finds herself increasingly trapped by her deception and the cruelty of those around her. Her only hope seems to be the enigmatic Bryce Tregowan, with whom the promise of a new life beckons. As she falls deeper into love and lies, can Rosie keep up the act, or will her secrets reveal themselves? And to what consequences?

The week ended on a high with a fabulous one-woman show by Ruthie Henshall, international musical star of Crazy for You, She Loves You, and Chicago. What a wonderful voice she has, and a delightful rapport with the audience. A brilliant evening, and a brilliant Festival. Can’t wait for next year. Not only a fun event but the marvellous Fowey River and town to enjoy.

Posted by Freda Lightfoot at 4:54 PM