Is self-publishing for you?

I gave a talk on this subject at the RNA-2013 conference at Sheffield, as I started publishing my back list back in 2010. At that time it was early pioneering days for ebooks, and I went on a steep learning curve to teach myself formatting. I soon realised that having the novels up as ebook was only the start, and set about joining the social network scene. Nothing much happened at first, sales were slow, although moving ever upward in the right direction. Then when Santa Claus delivered the Kindle to customers in the UK at Christmas 2011, sales really took off. I am now selling thousands a month. It has been an amazing journey.

Many more writers are now choosing to self publish. The publishing world is changing fast, and at a rapid pace. Many in order to restore a back list, as I did. Others because it is increasingly difficult to find a publisher in a world where less attention is given to building the mid-list. Often the book has been rejected because it did not fit into an accepted genre. Increasingly, contracts are being declined because they are considered too demanding of rights, lasting the length of copyright, in return for poor royalties. Financial considerations feature strongly in the decision, but for some writers the greatest benefit is that choosing this path gives them more control, both creatively and in how they run their career. This is an exciting new world for writers, offering choices we never had before.

Self-publishing is not, however, for everyone, nor an easy decision to make. Writers should be aware of the amount of work involved both before and after publication. You have to be a businesswoman as well as a creative writer.

Let’s consider some of the pros and cons involved:
1. There are no advances but royalties are much better. These can, of course, change at a moment’s notice, although you can protect yourself to an extent by making sure you are not dependent upon one etailer alone.

2. A writer can feel rather isolated having to deal with all the decisions such as cover art, editing, proofing, promo, etc., on her own. Many join a support group in order to resolve this and share expertise.

3. One plus is that lead-in times are less. Self-publishing an ebook can bring it to the market much quicker than the traditional route. However, sales take longer to build so you have to think in the long-term.

4. Lack of credibility without a publisher behind them can be a problem for some, but self-publishing is no longer viewed as vanity publishing, rather as a respectable way forward.

5. Publishers are actively exploiting the self-publishing world and offering contracts to authors successful in that field. It can, therefore, prove to be a viable step towards publication with a traditional house, so long as your numbers stack up.

Some people are put off by the amount of work involved. This can appear overwhelming at first but like anything else it does get easier once you know what you are doing and the initial set-up work is done. But if you aren’t particularly techie, or don’t have the time to do it yourself, help is available.

An editor:
One good result of S-P has been the way job opportunities have been created within the industry as authors buy-in services. You can hire an editor to edit and proof your ms, and I would strongly urge you to do that. It may cost, but you really can’t afford not to. Readers on Amazon are fairly unforgiving now of mistakes and howlers. No author, however experienced, can see her own errors. Our obsession with story can make us blind to typos, repetitions of words and ideas, time faults and even characters suddenly changing their name or eye colour. And new authors can struggle with the logic of plot development, with which a good editor can help. A fresh eye is essential as sloppy work will kill not only the book but your career stone dead.

Cover:
Unless you have an artistic eye, and are skilled in using Photoshop, then hire a graphic artist to design and make you a good cover. It is vitally important to have one that is attractive, that looks good in thumbnail on Amazon, on a large tablet, small mobile phone, and also in black and white on the basic Kindle or Kobo ereader.

Formatting and Distribution, ISBNS and Metadata:
You can use a company to prepare and format the ebook for you, and even distribute it. (See links below) You will need to buy ISBNs if you wish to sell beyond Amazon. The free one from Smashwords will not be accepted by many etailers. Each title will then need to be registered with Nielsen. You will be expected to provide metadata which is nothing more alarming that creating a blurb and some descriptive categories and tags for your book in a spread sheet.

Once the book is published, a new set of task will arise. You will then have to keep a record of sales, income and expenditure, track and analyse your data using the various methods available with Google analytics, Tweetreach etc., and be organised in every small detail of your business, because that’s what it is.

So how do you drive sales and make those numbers stack up?
Promotion is a vitally important part of S-P and you need to be prepared to set aside a month or two after publication to guest blog, chat on Facebook, Twitter and other social media, etc., in order to get the book noticed.

Other ideas might include a newsletter, book trailers, reviews on Goodreads, giveaways and contests, advertising through BookBub or Facebook, free samples and special price offers for short periods in order to get noticed. Discoverability is the in-word these days. But the real secret is to engage with your readers. It’s about conversation, not ‘Buy my book’. With the right kind of effort, authors can really get to know their readers, the fans who will sustain your career.

OK, I can hear you asking but wouldn’t it be easier to have a publisher do all of that for you? In your dreams! It would be naïve to imagine that a traditional publisher would put much money and effort behind a debut, or even a mid-list author who wasn’t a star name. There simply isn’t the budget in today’s world. Even in traditional publishing the author is expected to involve herself in a great deal of promotion. 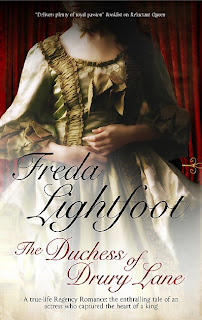 Some writers choose to be hybrids with a foot in both camps. I am currently one of those, as I also publish biographical historicals with Severn House. But it is increasingly common for entrepreneurial authors, or APEs, as they are cheerfully dubbed, to look at a new contract and reject it in favour of S-P. Is an agent still useful, assuming you can find one? They may well be able to sell other rights for you such as audio and large print, even foreign if you’re lucky. But this shouldn’t cost any more than the usual 15% commission.

Self-publishing is still in its infancy but expanding rapidly. Only you can decide whether or not it’s for you. But if you do decide to go down this route remember that the most important requirement is to produce a good book: a wonderful story, well edited and properly proofed with an attractive cover, if you are to achieve good sales and reviews. Always be professional. You cannot afford not to be.

Some links which may be useful:


Enjoyed a fabulous week at Writers' Holiday in Caerleon. It is always good to meet up with old friends who are as passionate about writing as you.

There are lots of courses to choose from, including painting, talks and evening speakers. We enjoy wonderful meals, and have lots of time to relax and chat about our favourite topic: Writing. And nobody's eyes glaze over.

I greatly enjoyed joining Penny Grubb's course on a Toolkit for novel writing. (Penny is the author of The Doll Makers - Annie Raymond Crime Series) Despite having written 40 novels it's always good to remind oneself of the structure one is aiming for, of what one is trying to achieve. With The Girl From Poor House Lane, for instance, I was so keen to keep Lucy for the sequel, she wasn't properly dealt with at the end, and boy did I get a load of complaints from readers. Thankfully they went on to buy the sequel, but I feel that was a lesson learned. Every villain must have their proper come-uppance, as Penny said in her course. She also recommended scenes to build tension, and then scenes to lower it so that the reader has time to step back and assess the situation. But a strong ending with all loose ends is essential.

One of the joys of this conference has always been the Cwmbach Male Voice Choir. They could not fail to touch your heart with their magnificent voices.

And here they are in the bar afterwards, still singing ... 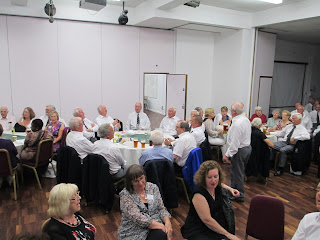 Gerry and Anne have been running this conference since the 1980s but sadly this was the last. I shall miss it. Here is Gerry about his business, making sure everything is in order in the book room. 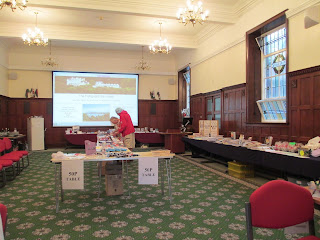 I'm grateful for the many happy times I've enjoyed at Caerleon, and wish them every success at their new venue in Fishguard.