Life in a Russian Prison

The Fortress of Saints Peter and Paul is an important landmark in St Petersburg, and definitely worth a visit. One of the first structures to be built in St Petersburg instead of being used to defend the city, it’s history is far more sinister. It quickly became one of the most feared prisons in the Russian Empire, the building also housing the headquarters of the secret police. During the revolution it was to hold some of Russia’s most prominent political prisoners.


We found it rather chilling when we visited last year although it is now a museum, and remarkably clean and cared for. But we were certainly given a grim picture of the harsh difficulties of life back in the days of the revolution. 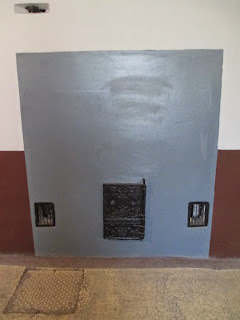 Seized by the Bolsheviks at the start of the October Revolution, the fortress was used to bombard the Winter Palace on the night of October 25, 1917. People could be arrested for no justified reason. Perhaps because a relative was politically opposed to the Bolsheviks, or a brother was suspected of having deserted from the Red Army. Or simply because they worked for a non-Russian. In addition, many foreigners themselves were arrested, the Bolsheviks making a list of British who lived in the city, so that they knew who to imprison next. Over 2,000 people in Petrograd were imprisoned and hundreds shot, the prisoners often forced to dig their own graves.


As Millie, my heroine in The Amber Keeper, says:

The prison at the Fortress of Saints Peter and Paul, situated on Zayachy Island in Petrograd was every bit as terrible as I had feared. Transported in a car over the Ioanovski bridge, through the courtyard, and from there to the fortress via Peter’s gate, never had I known such fear. I was numb with terror... Over and over I protested my innocence...

Nobody was listening, certainly not the guard who took most of my clothes and possessions from me and locked me in one of the dark and damp cells of the Troubetzkoy bastion. I tried talking to him in Russian, French and English, all to no avail. He simply ignored me...

There were traders charged with selling food without a permit, soldiers who had broken the rules by stealing property and selling it for themselves, and people who simply looked bewildered, rather like myself. Anxiety, fatigue and fear was evident in all their troubled faces...

I’ve taken out any spoilers, but her agony worsens as she struggles to survive. I doubt her cell looked as comfortable as this one. 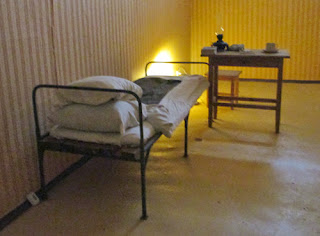 Disease was a big problem. Typhoid was rampant as there was no water provided for washing purposes, and because of the filth and the freezing cold. Prisoners were rarely allowed warm clothes to protect them, and no medical help. Not even much in the way of food. They had to rely upon friends and family to bring food in for them, or they would starve. 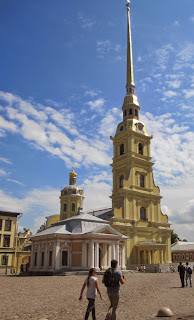 In the Cathedral of Saints Peter and Paul in the courtyard adjoining, are the graves of the Romonov family, including Tsar Nicholas II, Alexandra and their children. We found the display quite awesome.

This, of course, is the big attraction today, along with the neighbouring beach where families picnic in the summer. It is also used to host concerts, including the Petrojazz annual festival.


Following our visit we took a cruise along the River Neva where we were able to see the wonderful architecture and palaces along the banks. St Petersburg is an amazing place to visit, and if you go, don’t miss the Fortress of Saints Peter and Paul.

Set against the backdrops of the English Lake District in the 1960s and the upheavals of revolutionary Russia, The Amber Keeper is a sweeping tale of jealousy and revenge, reconciliation and forgiveness 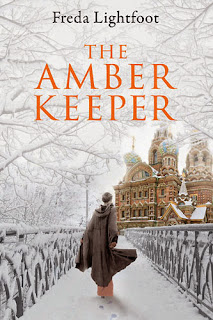 
Available to buy as ebook, paperback or audio:
Amazon UK
Amazon US