Volunteers of the Spanish Civil War

‘The aim of volunteers was not to establish communism in Spain, but to help the people hang on democracy.’ 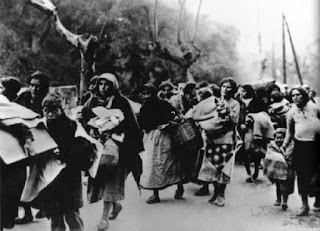 The characters in my book were inspired to go to Spain for personal reasons and as a result of what they saw on the British Pathe news. Crowds of refugees escaping the bombing of their town, children crying and bodies lying everywhere. This was why many local Scots volunteered to join the International Brigade. Of course some young men were seeking adventure, or felt the need to escape from some problem back home. But hundreds of brave men and even women volunteered to help the Spanish people, believing in humanity and democracy. These comprised ordinary working and middle-class folk, students, artists, photographers and many others, both British and Scottish. They also feared that if fascism was not stopped in Spain, it would spread to a wider conflict across Europe and maybe to England. And with no support from the British government they would make their own way to Spain.

Many Scottish Nurses went to help too. As Orwell states in his personal account of the Spanish Civil War - Homage to Catalonia, ‘Apparently there was no supply of trained nurses in Spain, perhaps because before the war this work was done chiefly by nuns.’ Possibly for that reason their assistance was greatly appreciated, as foreign medical volunteers were much better trained. The Scottish Ambulance Unit made a vowed commitment to neutrality, pledging to treat the injured of both sides even if this sometimes proved difficult. The nurses too remained neutral.

Spanish women took on their husbands jobs once they’d joined up to fight. The government recommended families did this, thus enabling industry to continue, women having been granted more rights during the war. But as we know, the Fascists did not always approve of them working close to the Front, even when they were supporting the men by providing food and clean clothes. However, many brave women paid no attention to this attitude, some even fought alongside the men and were in need of volunteer nurses if they suffered injury.

Around 2,400 British nationals fought in the International Brigade in Spain and about 550 were Scottish. Very few had had training and ammunition was not easily available at first. There were some volunteers who had naively imagined the war would last only a few months, and when they realised that wasn’t going to happen, would escape and return home. Later, that was disallowed, although most volunteers fought hard to the end, many of whom never returned.

The moment finally came when Franco declared he’d won and all foreigners must leave. Those who did return home were often assumed to be communists, as a consequence of their support in the Civil War, and had problems finding a job. Some men went to join up and fight in World War II, many believing that if the British and French government had done more to help Spain fight for their democracy, Hitler might never have started that war. Mussolini too might have thought twice about what he did. Yet many Spanish lives had been saved thanks to the International Brigade, including evacuated children. But sadly, Spain’s problems continued for some time.


It is 1936 and Spain is on the brink of civil war. Across Europe, young men are enlisting in the International Brigade to free their Spanish brethren from the grip of Fascism, leaving sisters and lovers at home.

But not all women are content to be left behind. In Britain, Charlotte McBain and Libby Forbes, friends from opposite sides of the class divide, are determined to do what they can; in Spain, Rosita García Díaz, fiercely loyal to her family and country, cannot stand by and watch. Three brave women, inspired by patriotism, idealism, love and even revenge, dare to go into battle against tradition and oppression.

Tying them all together is Jo, Libby’s granddaughter. Five decades later she travels to Spain hoping to make sense of a troubling letter hidden among her grandmother’s possessions. What she learns will change all of their lives forever.

Deceit, heartbreak, and a longstanding fear of reprisals must all be overcome if the deeds of the forgotten women are to be properly honoured.

You can buy here:

Other blogs about Forgotten Women


Posted by Freda Lightfoot at 6:00 AM