History tells us that when Gabrielle de Estrées was sixteen years old she was so pretty and already in possession of a good figure, that at her mother’s instigation she was sold as mistress, to Henri III. The deal was negotiated through a third party, Montigny, and a sum of six thousand crowns was agreed as payment to compensate her mother, Madame d’Estrees, a most dreadful and unfeeling mother if ever there was one, for the loss of her daughter. Montigny, however, only remitted her two-thirds of that amount, retaining the balance for himself, and when this came to the king’s ears he lost all favour.

Gabrielle, however, got the worst deal as she was passed on from lover to lover, including the Cardinal de Guise. He was her lover for more than a year, until May 1588 when he left for Paris to support his nephew, the Duke de Guise, in what became known as the Day of the Barricades. Guise, Queen Margot's long-term lover, is making a play for the throne, which leads him into the midst of danger and intrigue.

For a time Gabrielle felt free, was passionately in love with the Duke de Bellegarde, Grand Equerry of France, Master of the King's Wardrobe and First Gentleman of his Chamber. Henri III, with whom Bellegarde was in high favour, is said to have supported his suit. Unfortunately, Gabrielle was a sprightly, spoiled little miss at this time and as also in love with the Duke de Longueville. Playing one off against the other she couldn’t quite make up which would make the better husband.

She was considered to be a beauty, perfectly enchanting, and the courtiers waxed lyrical on the subject. 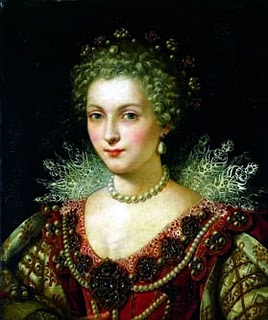 ‘Blue eyes so brilliant as to dazzle one; a complexion of the composition of the Graces but in which the lilies surpassed the roses unless it were animated by some deep feeling… a mouth on which gaiety and love reposed, and which was perfectly furnished.’

‘she had fair hair like fine gold, caught up in a mass, or slightly crisped above the forehead…’

‘the nose straight and regular, the mouth small, smiling and purplish, the cast of physiognomy engaging and tender. A charm was spread over every outline. Her eyes were blue, quick, soft and clear. She was wholly feminine in her tastes, her ambitions, and even her defects.’


Bellegarde was so besotted he foolishly boasted about her to his master, Henry of Navarre, who later was crowned Henry IV of France.

And the rest, as they say, was history…

Her life certainly makes a good story, and I couldn’t resist telling it. Henry means to have her, but Gabrielle desperately longs to choose her own lover for once, to marry and be respectable, wishing she hadn’t foolishly prevaricated over which one to take.

Meanwhile Henry's Queen, Marguerite de Valois, is determined not to agree to a divorce until she has a just financial settlement. But then there are other ways of getting rid of an inconvenient wife… 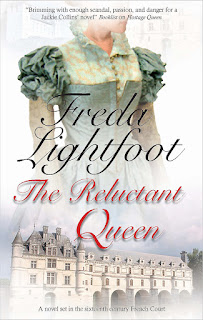 Here is a short extract from The Reluctant Queen at the moment Henry meets Gabrielle.

Gabrielle d’Estrées cried out with pleasure when she heard the clatter of hooves in the courtyard and saw that it was her lover. She sprang up from the window seat where she and her sister Diane had been engaged in needlework, delighted to have a reason to abandon it as she loathed sewing.

‘Oh, it is Bellegarde. He sent no message that he was coming today, and he has brought company with him.

Quick, Diane, go and offer the gentlemen refreshments while I change. I wish to look my best. He is constantly begging me to marry him, and this may well be the day that I accept.’ She giggled. ‘Or it may not, who knows?’

Diane smiled, giving her sister a quick hug. ‘Don’t tease him too much, precious. You would hate to lose him. Wear the blue, it matches your eyes. I’ll take the gentlemen out into the garden, then later I’ll keep his companion occupied while you and Bellegarde slip away for a private little tête a tête.’

Left alone, Gabrielle yanked on the bell pull to summon her maid, deeply regretting the lack of notice. She would like to have bathed and scented herself properly. As it was, she must simply do the best she could in the time available.

‘Fetch the blue gown,’ she cried, the moment the hapless girl appeared. ‘Quick, we must hurry.’ Papa might accuse her of being light-minded, but she was much sharper than people gave her credit for. Diane was right. She couldn’t keep Bellegarde, or Longueville of whom she was also fond, dallying indefinitely. It was vitally important that she capture a rich, elegant and handsome husband. But it was such fun choosing she was really in no hurry.

Ten minutes later, with her golden hair brushed till it shone and left to hang loose, falling in rippling waves to her waist, Gabrielle walked gracefully down the stairs and out into the garden where her father and sisters were already in conversation with their guests. Her mother was not at home, so Diane was acting as hostess. Inside her cool exterior Gabrielle was excited and happy that her lover had come to see her unannounced, seeming to indicate that he could hardly bear to be apart from her. As she approached the little party she caught her sister Juliette’s eye, realized she was trying to tell her something but couldn’t think what it might be.

Gabrielle dropped a flirtatious curtsey to Bellegarde, casting a sideways glance up at him through her lashes. ‘What a delightful surprise, my lord. I bid you welcome.’

‘You must first welcome the King. We were out riding and His Majesty was in need of refreshment.’
Gabrielle started. They had all been aware that the King was in the vicinity engaged in sporadic fighting, but never for a moment had Gabrielle expected him to call upon them. ‘I beg pardon, Your Majesty. Pray forgive my rudeness.’

She sank into a deep curtsey, kissed the hand that was held out to her, realizing as she did so what Juliette had been trying to impart to her by that warning glance. So this was the new king? Gabrielle was not particularly impressed. He seemed old, his late thirties she believed, and did not possess one iota of Bellegarde’s elegance and style. His linen was soiled, and, as he stepped forward to raise her from the deep curtsey, she had great difficulty in not screwing up her nose against the stink of horse sweat that emanated from his person. Clearly the King did not believe in bathing or scenting himself, as did her handsome lover. Her pretty shoulders shuddered at the lot of any woman obliged to sleep with this king.

Two maids hurried forward at that moment with trays of refreshment: wine and wafers, coffee and cakes. Gabrielle welcomed the interruption, which gave her a moment to collect herself and distance herself from the King. ‘Which would you prefer, Sire, coffee or wine?’ she asked, giving him one of her enchanting smiles.

Henry was entranced, struck speechless like a gawky schoolboy. Bellegarde had been absolutely correct. Never had he seen such a vision of loveliness. Her luxuriant fair hair, those dazzling blue eyes, and a complexion of lilies and roses. Her nose was divine, her lips moist and full, and when they parted slightly to smile at him, revealed perfect white teeth. He was surely in heaven and this was an angel.

A competition for my new book 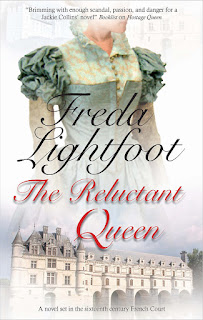 This month I'm doing a giveaway operated by Goodreads of three copies of my new historical novel The Reluctant Queen coming out on September 30, published by Severn House. This is the sequel to Hostage Queen which came out in May and has done really well. The paperback for that book is due 1 December.

Click the link below and enter your name for a chance to win a signed hardback copy of Reluctant Queen.

Sixteenth-century France. Gabrielle d’Esrées’ one wish is to marry for love, but her mother sells her as a mistress to three different men before she catches the eye – and the heart – of Henry of Navarre, King of France. Henry promises to marry her, but Gabrielle’s difficulties have just begun . . . for Henry’s wife will only divorce him if he promises not to marry Gabrielle. Is the love of a king enough to secure her both the happiness and respectability she craves and a crown for their son as the next dauphin of France?
Posted by Freda Lightfoot at 2:41 PM 1 comment: