One of the joys of living in Spain is that there isn’t the same commercial fuss made. Feliz Navidad will be up in twinkling lights, and pontsettias are everywhere, and yes, a few shops will be playing Jingle Bells and have a tree, but not to the same extent. Christmas itself is fairly low key.

The Nativity scene ‘Nacimiento’ can be seen in plazas in most small towns as well as many Spanish homes and shop windows, often rather splendid. Sometimes, on Christmas Eve there will be a live Nativity scene, with actors and actresses playing the parts of Mary and Joseph. Baby Jesus does not appear until the right time, and nor do the wise men. 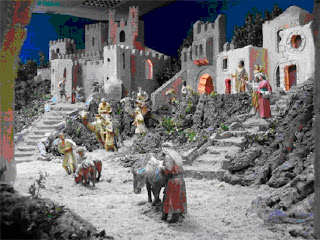 December 24, Christmas Eve
Nochebuena is when the main Christmas meal is taken, often roast lamb or suckling pig, a feast that takes place quite late, as in all Spanish fiestas, starting around 10 p.m. and going on until the small hours. Some families will sing carols around the nativity scene which remains without the baby until the stroke of midnight. Others go to midnight Mass ‘La misa del Gallo’, or ‘Rooster Mass’, so named after the bird who reputedly announced the birth of Christ. Many people, of course, like the rest of us, just watch the Christmas programme’s on TV while enjoying the traditional Turrón (nougat), marzipan, or mantecas (a range of butter-based biscuits) with Cava.


January 6th, Three Kings Day
Traditionally Spanish children do not get their presents on Christmas Day from Santa Claus, or Papa Noel, as he is called. They have to wait until the Fiesta de Los Reyes. What we would call Epiphany. By now we’re packing our Christmas decorations away, but the Spanish are still partying. The excitement starts in the late afternoon or early evening of January 5 when there is often a parade through the streets with camels, yes, real ones, carrying the three kings, Melchor, Gazpar and Baltasar, who throw sweets into the watching crowds. A custom that no doubt started in Moorish times. A whole procession of dancers and musicians, trailers and floats, will follow. It is truly a sight to see. The little girls dress up in their flamenco dresses, little boys as kings or drummer boys.They run alongside with their little bags catching gifts and sweets. 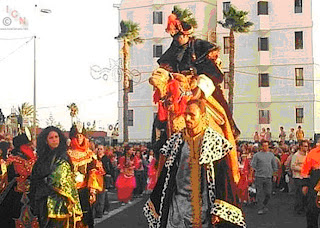 In the run up to the 6th of January children can meet the wise men at some department stores and tell them what they would like for Christmas, just as our children tell Santa Claus. On the 5th, the shops remain open until after midnight. Before going to bed the children leave their shoes on the door step so that the Kings will know who to leave presents for. Some Spanish families are starting to put presents under a Christmas tree, perhaps because there are too many to put in a shoe. And just as British children leave a mince pie and a drink for Santa and his reindeer, Spanish children also put out something to eat and drink for Melchor, Gaspar, and Baltazar, and water and grass for their camels. Well, they do have a lot of work to do that night. 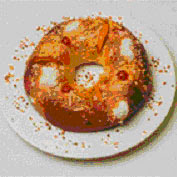 The children wake in great excitement the next morning to find their presents. For breakfast or after lunch, the family will eat the typical dessert of the day, the ‘Roscón de los Reyes’. This is a large ring shaped cake or sweet bread that is decorated with candied fruits, symbolic of the emeralds and rubies that adorned the robes of the three kings, sometimes a gold paper crown is often provided to decorate the cake. Hidden inside it are surprises ‘sorpresas’. The one who finds the lucky prize is King or Queen for the day while he who ends up with the unlucky bean is expected to pay for next years Kings’ Cake – and they are not cheap!


And so another day of feasting commences. January 7 is a very quiet day in Spain. No businesses open, everyone at home in recovery.
Posted by Freda Lightfoot at 12:05 PM No comments: