Is accuracy important in historical fiction?

Sebastian Faulks when interviewed on radio 4 described himself as a novelist whose books happen to be set in the past. ‘For me,’ he said, ‘the use of historical settings is to cast the present in a more interesting and broader light.’ 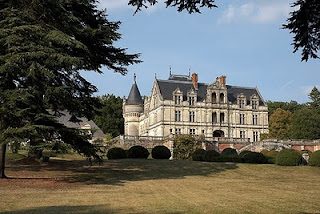 People are clearly more important to him than circumstantial detail. Some novels are so deeply researched they seem like non-fiction in disguise. In a romance they can kill the story dead by boring the reader. Even so, we must do our research and set the scene as accurately as we can. We can take some liberties, for the sake of the story, but if we veer too far from the facts as we know them, the reader may feel cheated and lose faith in the work. If a mistake crops up, an anachronism, this will jar the reader, and jerk them out of the story back to the present.


It’s also best also to avoid controversy or anything doubtful which has a hint of being anachronistic. It hasn’t so much to be correct as to feel correct. E.g: Soldiers did play baseball in the American Civil War. I believe they also played in a Jane Austen novel too, but the reader may find that hard to accept. 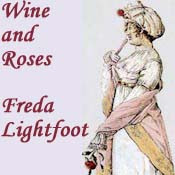 Societies traditions, moral mores and customs help to build the picture, but this is where even the most fanatical historian can come unstuck. Many time periods, such as the Regency, have become so stylised that you may actually be considered to have written a historically inaccurate book if you do not follow the “popular perceptions” of the period. Presenting a realistic, complex view of Society during a specific era can be the thing that makes the difference between a passable yarn and a gripping story.

It’s surely about striking the right balance. The story is the most important thing, but it must be firmly rooted in its world. It must not simply be a costume drama. The past must be made as relevant as the present. The problems are the same, human emotion, conflict and behaviour. Falling in love and losing that love are just as painful.
Bernard Cornwell said: ‘Essentially the background has to be right because it’s the detail of the background that pins down the fiction in the foreground.’

It’s a combination of accuracy and imagination to give credibility, create atmosphere, and make the story plausable. The writer needs to incorporate the odd, quirky detail. Perhaps the price of cheese, a housemaid’s monthly wage, a description of underwear, length of time for a journey, breed of horse, how someone would get their boots mended, what book or newspaper they might read. How would they conduct a funeral, spin wool, pluck a hen, fire a rifle, fight a duel or take part in a bare knuckle fight. Whatever is needed for your story.

When I can’t draw on personal experience or memories I use interviews, explore diaries, memoirs, biographies, newspapers, etc. I select with care and don’t put material in just to show off how much I’ve learnt. It is the attention to small detail which builds the atmosphere, and a strong sense of time and place which creates that feeling of reality and verisimilitude which is vital for the reader to sit back and enjoy the ride.
Posted by Freda Lightfoot at 1:06 PM 15 comments: 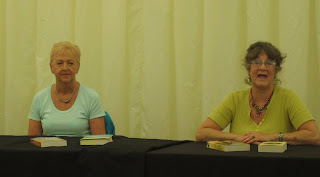 Had a lovely day out yesterday at Southport Flower Show. Listened to June Francis and Lyn Andrews giving a talk, organised by Pritchards Books. Erica James will be there on Saturday, if there are any of her fans out there. 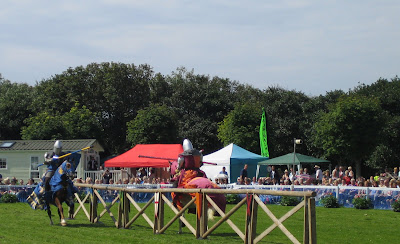 After that we watched some medieval knights jousting, a dog display team, some birds of prey which were absolutely beautiful, and lastly a most entertaining and skilful performance by two collies rounding up ducks. Great fun. 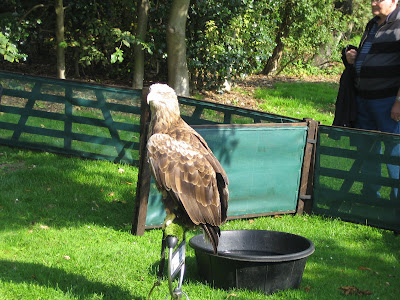 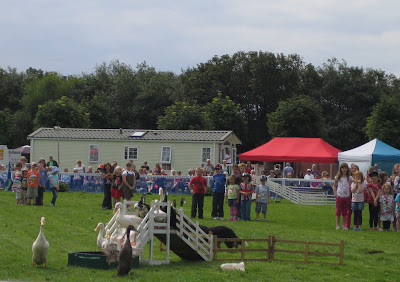 There were also some wonderful show gardens, flower displays, huge vegetables (do they really taste good?)  Here are some gold medal winners. 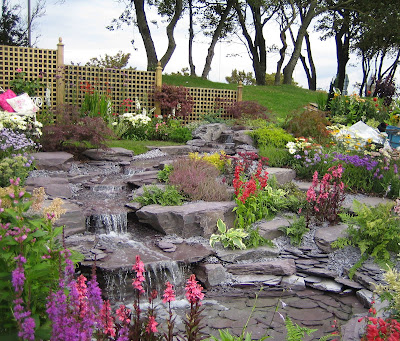 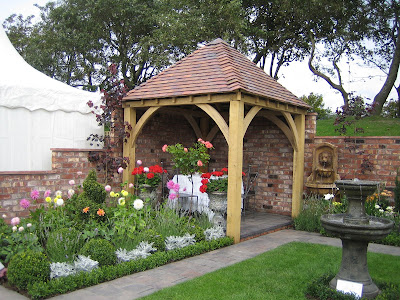 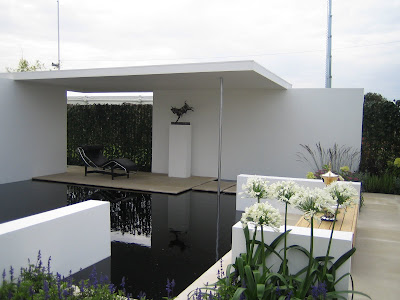 And where's Dame Edna Everage when you need her? 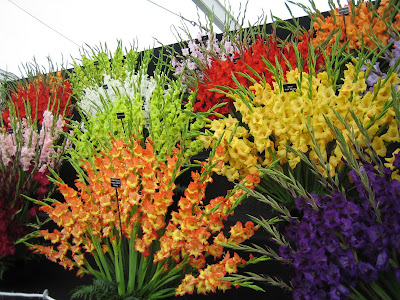 The show runs till Sunday21st August. I for one will be sure to visit next year too.
Posted by Freda Lightfoot at 1:19 PM No comments: 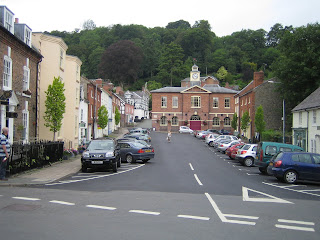 If you're looking for a lovely place for a day out in Wales, try Montgomery. This delightful little town still has the kind of small shops you thought had quite disappeared in this age of supermarkets and big chains. But here they seem to flourish in all their individuality, selling cookery books, crafts, pictures, clothes, and delicious delicacies to tempt the taste buds.


We spent a happy hour exploring the town’s museum, which was rather like the tardis, small and insignificant on the outside but large and fascinating within. Here we could examine tools used by local craftsmen, the bread oven and brewing vat from when the building was once an inn, and upstairs we learned about the local workhouse, the civil war, and other important dates in the history of the town. 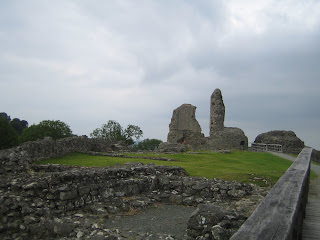 High above the town stands Montgomery Castle. The original motte and bailey, known as Hen Domen, was built at the order of Roger de Montgomery, earl of Shrewsbury circa 1071. Robert of Belleme, son of Roger, took part in a revolt in 1077 against William the Conqueror. This rebellion was quickly put down and the participants generously pardoned. As a consequence, William decreed that garrisons be placed in all baronial castles of importance, in order to make future rebellion more difficult.

Robert inherited his mother Mabel’s property when she was killed in 1082, an area which comprised part of the region between Normandy and Maine. It is due to this inheritance that Robert has come be known as of Bellême rather than of Montgomery. William the Conqueror died in 1087 and Robert’s first act on hearing the news was to expel the ducal garrisons from his own castles. By 1102 the castle was in the hands of Baldwin de Boulers, and it is from Baldwin that Montgomery gets its Welsh name, Trefaldwyn (Baldwins town). The de Boulers held the castle until 1215 when the fortress was destroyed by Prince Llywelyn ab Iorwerth. 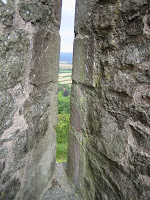 The rebuilding of Montgomery Castle in stone was commenced circa 1223 slightly to the south-east of the original wooden version. The architect of the new castle was Hubert de Burgh who also rebuilt Skenfrith, Grosmont, and White Castle in the Welsh Marches. From 1223 until 1228 masons built the inner ward, or donjon, on a huge rock overlooking the town of Montgomery. A gatehouse was also built, two towers and a curtain wall, a necessary defence as the castle was subjected to many attacks over the years, battered by various Welsh wars, and in the English civil war in 1643 when Edward Herbert, 1st Baron Herbert of Chirbury, was forced to surrender the castle to Parliamentary troops by order of Parliament. 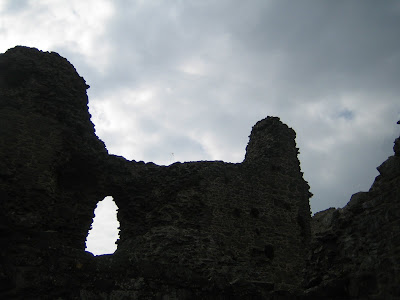 It is now little more than a ruin, if a stark, atmospheric one, and still worth a visit. You walk across a modern wooden bridge into the inner ward from where you have the most marvellous views of the town and the surrounding countryside. It’s worth the walk for that alone. 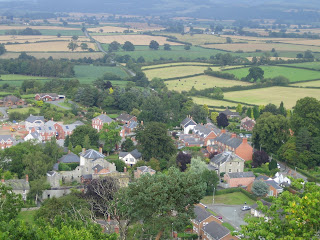 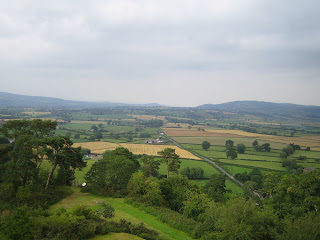 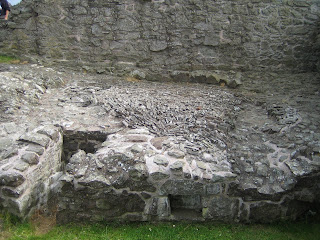 I’d be interested to learn if anyone knows why this particular circle of stones is built the way it is. Could it be part of a threshing circle? Or something to do with a former chapel? The pattern does not seem to be accidental. A mystery we may never solve.
Posted by Freda Lightfoot at 5:11 PM 4 comments:

For anyone feeling a little jaded with their writing and in need of a break, then I can’t recommend Writers’ Holiday highly enough. It takes place at the end of July each year at the Caerleon Campus, University of Wales College, Caerleon, Newport, South Wales. 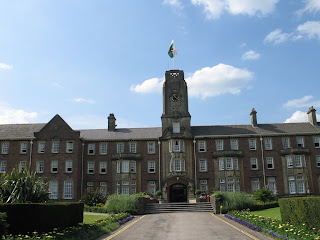 Personally planned and supervised by Gerry and Anne Hobbs, nothing is too much trouble for them. It runs from Sunday afternoon through to Friday morning, with no less than fourteen courses to choose from. I was leading one on the historical novel in the second half of the week, so in the first part I chose the painting course. I doubt I’ll be putting my picture on my wall but it was great fun to do, and my first effort with acrylics.

The course got off to a lively start with a most entertaining talk by Ray Allen (Some Mothers do 'ave 'em). I’ve heard him before but he never disappoints. On Monday afternoon Julie Cohen told us about her struggles to get published, her writing life, as well as letting us in on many of her writing secrets. She was a generous and lively speaker and I should think everyone would rush out to buy her wonderful books as a result. On Tuesday we listened to Leila and Ali Dewji tell us about their new publishing venture: Acorn Press. For anyone interested in going down the self-publishing route and needs support, they certainly seemed to have the necessary expertise. 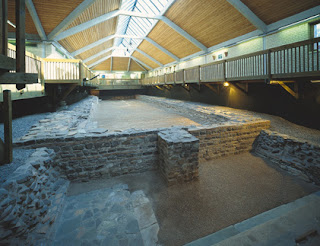 Wednesday was excursion day, but I chose to visit the Roman Museum and baths in Caerleon itself, which were pretty impressive. Far bigger than I´d expected, and with such realistic sound effects I half expected to see a Roman diving in. I did, of course, manage to squeeze in a chocolate muffin and cup of tea somewhere along the way. 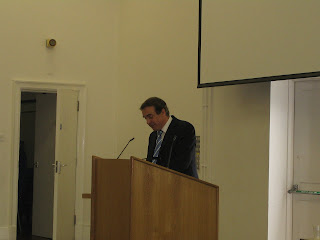 Here is John Townsend, children´s author, reading one of his delightful poems. I can quite see why children love his books so much. John specialises in writing for special needs.

After tea each day there were several interesting talks to choose from on a wide variety of topics, followed by Tai Chi for the enthusiasts among us.But there´s also plenty of time to share writing experiences, pick up tips, or just sit and chat. 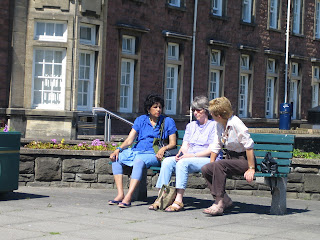 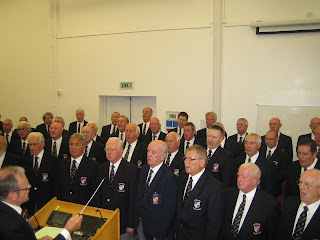 On the last night, Thursday evening, we were royally entertained by the Cwmbach Male Choir, which made my heart soar. What power they possess in those wonderful Welsh voices. Afterwards they repaired to the bar to sing some more. This is only half of them as there were 60 in all.

150 delegates stay in single en-suite accommodation, albeit of the basic student variety, but perfectly adequate, and you can request a ground floor room if you wish. I clattered up an iron staircase to one on the third floor which was fine, next door to the kitchen so I could make myself a cup of tea or coffee whenever I wished. I’d recommend taking your own pillow if you can carry one, as only one was provided. And coat hangers seem rare, but other than that I had no complaints.

I came away stimulated and inspired, having had great fun, a catch-up with old friends and made many new ones as everyone is most welcoming. Oh, and I booked for next year.