Girl Bands in World War II Girl Bands are not a new phenomena. Long before Girls Aloud, The Spice Girls, or even The Supremes there were girl bands of quite a different sort. During World War II Girl Bands took over when the boys joined up. But it was a time when prejudice against women performing was still quite strong. Many people thought it wasn’t quite proper for women to blow into a trumpet or make a sax sing.

There was a wonderful movie called The Last of the Blond Bombshells, featuring Judy Dench. It’s the story of a widow who was obliged to confine her sax playing to the attic while her husband was alive, but on his death decides to follow her passion and start her own band. I loved this film, and the idea inspired me to write my own story about a girl band, set in Manchester during the war.

Dancing on Deansgate is about Jess Delaney, a young girl who loves music and discovers she has a talent, thanks to a Salvation Army sergeant who teaches her to play the trumpet. Despite an abusive uncle and a feckless mother, and with her beloved father away fighting in the war, she decides to make something of her life.

But Jess doesn’t find it easy to get the band underway. Band leaders and ballroom managers frequently accused them of not being able to withstand the physical hardships of long hours of playing.

‘Women don’t have the stamina that men have,’ said one.
‘Limited scope,’ said another.
‘Women are long on looks but short on talent.’
‘We aren’t in the business of employing young ladies who think it might be fun to show off on stage, however charming and genteel they might be.’

This attitude incensed Jess and she would tell them in no uncertain terms that her girls could play In the Mood every bit as well as they could play Greensleeves.

One manager had the gall to say that women had no real sense of rhythm in a jam session, as they were hopeless at improvising.

Another, trying to be conciliatory, remarked, ‘I see why you ladies are offering to step in, with all the men having been conscripted for service and bands desperate for decent musicians. But we’re looking for professionals, not amateurs. We need the best.’

Outraged, Jess’s response was sharp. ‘We are the best, and how can we ever get to be professional if we’re never given the chance.’

A shake of the head. ‘Women aren’t made to sit on a stage and blow their brains out.’
‘We could blow the men right off it.’

As well as proving they were skilled musicians, they were also expected to look feminine, but a glamorous look brought its own problems. Slinky gowns, together with sexy swing music, could bring about unwelcome invitations.

‘Once, at a function for naval officers on board a destroyer, Jess felt able to soothe the girls’ nerves by reminding them that these were a class above the ordinary enlisted men so there would surely be a bit more decorum. She was delighted when not only did they play terrific music that night, but looked pretty good too in new slinky gowns of gold sateen. Perhaps too good, for afterwards the Chief Petty Officer came round and invited them to ‘come and mingle, so they could have a drink with the boys.’

‘I’m not sure that’s such a good idea,’ Jess said, glancing quickly around at the others to make sure they agreed with her. She could see at once that they did, perhaps with the exception of Ena, who was already giving the Chief Petty Officer the glad eye. How that girl ever imagined she could survive in a nunnery, Jess couldn’t imagine.


‘Come on now girls, be fair. You’ve got to be nice to the lads. They enjoy spending time with a pretty woman. A bit of fraternising does no harm at all. They deserve it.’


‘What, exactly are you suggesting?’ Adele asked, dark eyes narrowing to a dangerous slit.


‘Why do you think we invited you, and not a men’s band? Some of these guys might not see a woman again for months, if at all. Do them a favour, girls. Be generous. You know that’s what is expected. Why else would you have accepted the invitation?’

Lulu poked him in the chest with her sharply pointed, fuchsia tipped finger and pushed him backwards out the door. ‘Sod off, you nasty little man. We’re musicians, not tarts!’

They were very careful which bookings they took after that. Enlisted men, they discovered, were in fact far more respectful than the officers, certainly in their experience.’ 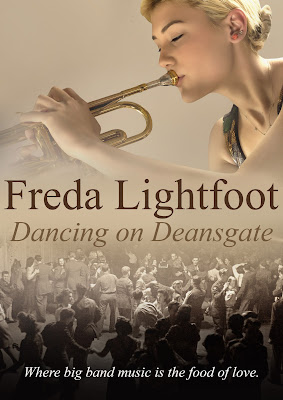 They called it the Christmas Blitz, but there are no festivities for Jess, locked in the cellar by her feckless, tarty mother. And when Lizzie is imprisoned for shoplifting, Jess is sent to live with her uncle, a bullying black marketeer, who treats her like a slave.

Jess's natural musical talent offers an escape route - and the chance for love. But Uncle Bernie has never forgiven his niece for refusing to join his illegal schemes, and threatens to deprive Jess of her hard-won independence. 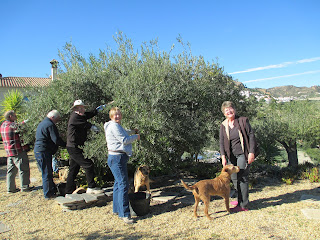 Unbelievably, Christmas is almost upon us. After a wet summer spent at our holiday home in the UK, we are quite pleased to be back in sunny Spain. Within days of arriving home we were into the olive harvest, ably assisted by our trusty band of pickers. The day was bright but with a cold wind and we were glad to warm up with a lunch of hot chilli and apple crumble. Wine, of course, was involved and anyone still sober valiantly went back to do more picking. 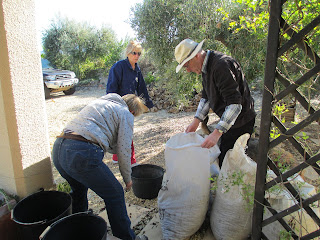 David, helped by one of the crew, took the crop to the local cooperativa where it weighed in at 167 kilos, which resulted in 28 litres of extra virgin olive oil from 30 trees. Plenty for our pickers, and ourselves. It was classed as muy fuerte, which is very strong, as olives should have a high acid content. Good quality olive oil will keep for a year or more if stored in a cool dark place. There are still more to pick, once they ripen from green to black, but the bulk of the work is done, and what a fun day it was. 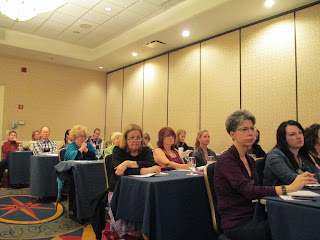 In November I attended a conference in New York organised by the Novelist Inc. It was a hectic three days with the first talk beginning at 8am, and the last finishing around 10pm, but it was excellent. American authors are savvy operators, very businesslike and I learned a great deal from them. 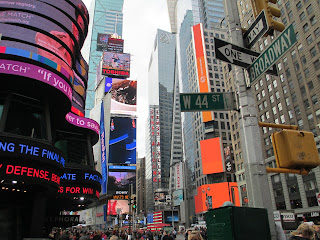 We found time to do some sightseeing in New York itself, but had to make rather a hasty exit as Sandy was about to arrive. BA found us an earlier flight, the last to leave New York on Sunday evening at 9.55. Scary! The subway, trains and buses had already stopped running. I confess it was something of a bumpy take off, with everyone very quiet, but we were all happy to be leaving. We’ve watched events since with great sadness and heartfelt sympathy for those caught up in it.

I also attended the Romantic Novelist Association Winter Party, which was a very lively event. No one can talk like a writer, maybe it’s because we spend so many hours in silence.

But now I have my head down writing, having a deadline to meet, so I will wish you all a very Happy Christmas and a prosperous and healthy 2013.

Posted by Freda Lightfoot at 4:22 PM No comments: