Poverty During the War and Depression years

Little remains of the original Ancoats save for a handful of decaying factories and the dark red brick edifice of the old hospital. But this was once an area of row upon row of back to back houses, where Irish and Italian immigrants jostled side by side with fiercely proud Lancastrians; a tight knit community where folk had a loyalty to their particular street and a dread of being accused of ‘getting above themselves,’ or ‘mekkin’ out they were summat.’ For a man to lose his job in the late 1920s was bad, though sadly quite common, but to lose his dignity and pride as well was unthinkable.

In a world with little or no interest in women’s rights over their own children, no free medical assistance or welfare benefits, workers’ long hours and low pay, life was tough during the depression and war years. The laws of renting property, wills and insolvency, the means test, the dole, rationing, being bombed out or evacuated, would all create problems. Even a middle class family could fall into difficulties. If the father lost his job, as frequently happened, or he died leaving a young family, who would support his wife and children? The family might be split up and farmed out to reluctant relatives, put in an orphanage, or find themselves facing the workhouse.

And what if someone in the household was sick, or giving birth? How could they afford a doctor when only the man as the wage earner of the family could be insured? Unmarried mothers suffered the asylum, institutions and reformatories of various kinds, or simply had their children taken away. 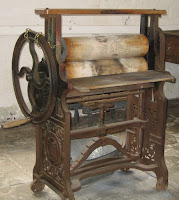 Social issues are a vital ingredient of the saga. Readers love to discover how women coped. Even domestic life was hard, doing the washing with a mangle and dolly tub, no central heating, vacuum cleaner, fridge or similar household gadget, and a privy down the yard. Perhaps some look back on hard times with a rose-tinted view, remembering when a community pulled together, didn’t need to lock their doors as they’d nothing worth stealing.

I try to lighten the tragic nature of the tale with a little humour, because that’s what helped people to cope. The Lancashire sense of humour was rarely lost, women stood ‘camping’ on their donkey-stoned doorsteps, arms folded over their apron-fronted bosoms, and there were many such as Old Flo with her own set of morals, as if she’d personally been handed the tablet of stone by Moses himself. Yet despite the hardships, or perhaps because of it, neighbours stood by you, giving you a pinch of sugar or cup of milk because it might be them needing it next week, and when poverty yawned and hungry stomachs ached, even children must learn to live by their wits as Polly’s son Benny learns to his cost.

My family were weavers for generations on both sides of the Pennines. I have vivid memories of my grandmother black-leading her range and donkey-stoning her doorstep. You could have eaten your dinner off her stone flag floors for although she was poor, she was scrupulously clean. Therein lay her dignity. She would tell of how my grandfather, confined to a wheelchair, couldn’t work so in addition to caring for her children, one of whom was scalded to death while in the care of a child minder, she minded her six looms throughout a long working week, sang "I Shall not Want" three times every Sunday in chapel while worrying about what to find to eat for their tea.

The gritty northern saga usually concerns a strong woman fighting against the poverty of her surroundings, as well as the trials and tribulations of the times in which she lives. Disasters abound, but the heroine must win through against all odds, stronger in spirit than before. I seek out stories of the social under-classes in towns and rural backwaters. I’ve interviewed so many old folk with fascinating and deeply disturbing stories. That, to my mind, is what history is all about. People. 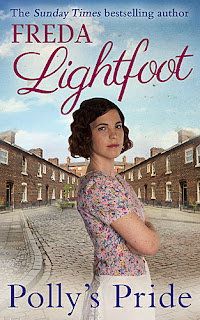 Living in the deprived area of Ancoats, Manchester, Polly Pride feels luckier than most … until her husband, Matthew, loses his job and her life is thrown into turmoil. In a desperate act to save her family from starvation, Polly sells all the family goods and buys a handcart from which she sells second-hand rugs and carpets. But struggling to deal with poverty and her husband’s hurt pride are only the start of her problems. For when tragedy strikes, Polly must summon all her courage to keep herself and her family from falling apart.

Winners will be announced here on Sunday 6th September.

a Rafflecopter giveaway
Posted by Freda Lightfoot at 7:00 AM 8 comments: