The Glamour of Being a Writer

It always defeats me how anyone can imagine writing to be a glamorous profession. I spend six to eight hours a day at the computer, sometimes longer when a deadline looms, five or even six days a week. I take far too little exercise and miss out on sunny days, even when in Spain. And generally wear my scruffiest, most comfortable clothes while working, so don’t look in the least bit glamoroous. 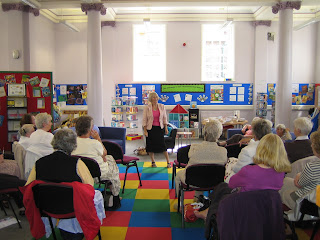 When called upon to do a talk I get to put on a business suit. Could that be considered glamorous? The event is often somewhere difficult to park and I struggle with my box of books, and I end up looking slightly harassed by the time I arrive. Or else it’s out on some distant hillside miles from the village it’s supposed to serve and my shoes are muddied by the time I get there. However, it’s always pleasing if the audience enjoy the talk and laugh at my anecdotes. Can that lady on the back row hear? Oh, she’s asleep, so that’s all right.

Is there glamour perhaps in playing at being a media star? In this, one is either interviewed live on the telephone, which is daunting but at least the interviewer doesn’t realise you’re wearing your slippers. Or else you get to go into a studio which is generally over-stuffy and rather shabby and you’ve got ten minutes at most in which to tell your life story, say what the book is about, why you wrote it and one or two funny anecdotes to fix it in the listener’s mind between the weather and the travel news.

Television is worse. The crew, usually one interviewer and a cameraman, spend hours in your house, filming you turning the pages of your book, or have you walking into your study again and again so they can film you from every possible angle, or up and down the street outside, or standing in a gale of wind to answer their questions. This endless toil results in a thirty second slot, mainly comprising a close up of your hands on the keyboard and a voice-over which might be yours, saying something inane about how important it is for you to write. At least they panned in on the row of books on the shelf, or added a bit of film connected to the period of the story.

In-depth interviews with newspaper journalists allows more time, but they often probe into the darker corners of your private life which you’d much rather keep closed. On occasions they start telling me about the novel they’re working on. I’ve even been asked if I mind being classed as a writer of romance, as if that were in some way demeaning. Next comes the photographer to take scintillating pics of you - and where does he choose? In your garden beside the pretty roses? Curled up in your cosy chair reading a book? Nope, at your computer, of course, where else? Not glam at all. 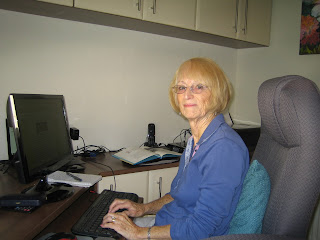 Real celebrities are generally leggy, blonde and beautiful, and sit in smart restaurants in dark glasses ordering lemon tea. So maybe that’s what I’m doing wrong, since I’m none of those things, can’t stand lemon tea and never even reached five foot.

But who needs glamour anyway, or fame and fortune? I love to write, so nothing else really matters. I’m cosy in my bunker, eyes glued to the screen, engrossed in my make believe world. And no one has come to take me away in a little yellow van yet. I chat with friends and readers on Facebook and Twitter, and I’m always humbled and thrilled when people email or message me to say how much they enjoy what I write, or tell me how a story has cheered or deeply moved them while they’ve been coping with difficult times. What more can I ask for than that?

Posted by Freda Lightfoot at 7:00 AM 8 comments:

Girl Bands are not a new phenomena. Long before Girls Aloud, The Spice Girls, or even The Supremes there were girl bands of quite a different sort. During World War II Girl Bands took over and became increasingly popular once the boys joined up. But it was a time when prejudice against women performing was still strong. Female singers such as Vera Lynn was quite acceptable, but many people thought it wasn’t quite proper for women to blow into a trumpet or make a sax sing.

Ivy Benson was a highly skilled clarinetist and saxophonist who formed her All Girls Band in 1939 playing throughout the war. It is said that she was inspired by listening to the recordings of Jimmy Dorsey and Benny Goodman. They became one of the top bands of the era, although not without some resentment from male band leaders, and the worry that some of her prized musicians would sometimes leave to marry.

There was a wonderful movie called The Last of the Blond Bombshells, featuring Judy Dench. It’s the story of a widow who was obliged to confine her sax playing to the attic while her husband was alive, but on his death decides to follow her passion and start her own band. I loved this film, and the idea inspired me to write my own story about a girl band, set in Manchester during the war.
Dancing on Deansgate is about Jess Delaney, a young girl who loves music and discovers she has a talent, thanks to a Salvation Army sergeant who teaches her to play the trumpet. Despite an abusive uncle and a feckless mother, and with her beloved father away fighting in the war, she decides to make something of her life. But Jess doesn’t find it easy to get the band underway. Band leaders and ballroom managers frequently accuse them of not being able to withstand the physical hardships of long hours of playing.

Extract:
‘Women don’t have the stamina that men have,’ said one.
‘Limited scope,’ said another.
‘Women are long on looks but short on talent.’
‘We aren’t in the business of employing young ladies who think it might be fun to show off on stage, however charming and genteel they might be.’
This attitude incensed Jess and she would tell them in no uncertain terms that her girls could play In the Mood every bit as well as they could play Greensleeves.
One manager had the gall to say that women had no real sense of rhythm in a jam session, as they were hopeless at improvising.
Another, trying to be conciliatory, remarked, ‘I see why you ladies are offering to step in, with all the men having been conscripted for service and bands desperate for decent musicians. But we’re looking for professionals, not amateurs. We need the best.’
Outraged, Jess’s response was sharp. ‘We are the best, and how can we ever get to be professional if we’re never given the chance.’
A shake of the head. ‘Women aren’t made to sit on a stage and blow their brains out.’
‘We could blow the men right off it.’

As well as proving they were skilled musicians, they were also expected to look feminine, but finding the right clothes to wear wasn’t easy either, as fabric for dresses was in short supply. Faulty parachute silk was often used instead, and a glamorous look brought its own problems. Slinky gowns, together with sexy swing music, could bring about unwelcome invitations, as if fraternising with the men rather than a passion for music, was their main purpose in life. 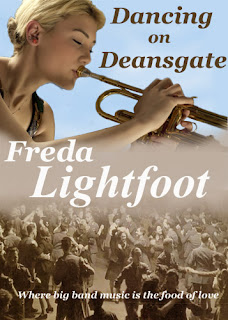 They called it the Christmas Blitz, but there are no festivities for Jess, locked in the cellar by her feckless, tarty mother. And when Lizzie is imprisoned for shoplifting, Jess is sent to live with her uncle, a bullying black marketeer, who treats her like a slave. Jess’s natural musical talent offers an escape route - and the chance for love. But Uncle Bernie has never forgiven his niece for refusing to join his illegal schemes, and threatens to deprive Jess of her hard-won independence.