The First World War in France.

We’ve recently enjoyed a wonderful holiday in France exploring the First World War, feeling keen to find evidence of my great uncle and my husband's uncle who were both killed. I didn’t find mine as Herbert Akred was killed in Belgian, which we didn’t visit. But we did find my husbands uncle.The first day we started at the battlefields of Gommecourt where the Pals regiments from the Midlands and London fought. In the afternoon we moved to Serre where the Accrington Pals and other Northern Pals Brigades were largely wiped out on the 1st July. We found David’s Uncle Norman’s grave in the Queens Cemetery near to the Accrington Pals Memorial, which has been built in Nori Bricks from Accrington.

The second day we saw the Ulster Tower and the Thiepval Memorial and museum and then went on to the Lochnagar Crater created by a massive underground explosion from explosives tunnelled under the German positions.

At one point we saw reconstruction of the trenches in a village museum, which was fascinating and after we’d had a good lunch in the local restaurant. 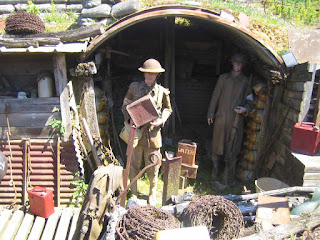 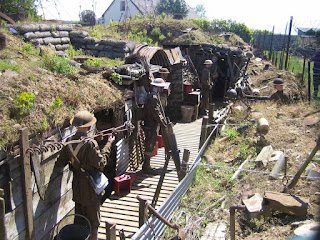 Our final day we looked at the woods at Guillemont and the amazing Delville Wood, which was almost totally destroyed apart from one tree that remains. All round it the wood was replanted after the war. In the afternoon after lunch in Albert, we saw the excellent Museum in Albert which is underground and then moved on to the Red Dragon memorial to the welsh pals and the woods around it.
We were taken everywhere in a coach, and visited various appropriate places showing the army members, and given fascinating details by Tim Thurlow who was excellent.


He said: ‘In 1914 they had joined up together, many into what in the North was known as ‘Pals’ battalions, in 1915 they had trained together in any number of caps and billets, and in 1916 during the Battle of the Somme, they all too often died together as well. They became what later historians called ‘The Lost Generation’ – the men who had marched to Picardy and found their graves in the poppy covered fields.’


And we saw many wonderful details of cemetaries. 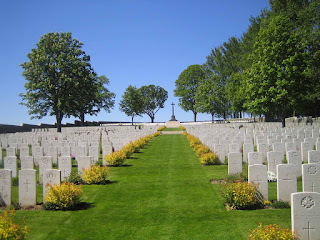